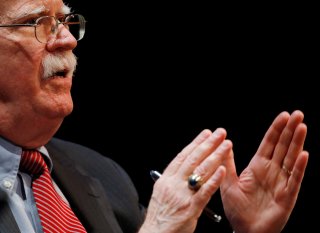 John Bolton, the former national security adviser who was ousted from his job last September (Bolton claims he resigned), has been on a tear over the last week. His memoir, “The Room Where it Happened,” documents a series of allegedly explosive encounters with President Donald Trump during Bolton's 17-month tenure. By now, you have likely come across some of the more salacious excerpts from the book—including what Bolton himself likens to a campaign of systemic obstruction of justice on behalf of the dictators and authoritarians Trump appears to respect so much.

The media is jumping all over the story, covering Bolton’s book as if it was this century’s bombshell blockbuster. While the general public doesn’t have access to the volume yet, it’s safe to say that 90% of the pages are likely designed to make Bolton look as if he was the noble insurgent fighting his boss and trying to prevent the U.S. from being on the wrong side of history. And, knowing Bolton’s reputation, there are likely a few ham-fisted attempts to drag down his former colleagues in the process.

Normally, I wouldn’t touch a Bolton screed with a 10-foot pole. I didn’t read his last memoir (“Surrender is not an Option”) when it was published over a decade ago and I don’t plan on reading this one either. But scrolling through the excerpts, I couldn’t help but marvel at Bolton’s nerve. That Bolton had the audacity to pan Trump’s outreach to North Korean Kim Jong-un when he has a decades-long record of failure on the subject is beyond ironic (weeks before Bolton was appointed as national security adviser, he wrote a column in the Wall Street Journal arguing that bombing a nuclear-armed North Korea would be an act of self-defense). You almost have to admire his lack of self-perception.

In Bolton’s recounting, Trump’s slap-dash Singapore summit with Kim Jong-un was a “foolish mistake” that could have been catastrophic to Washington’s objective of denuclearizing the North. "Trump told...me he was prepared to sign a substance-free communique, have his press conference to declare victory and then get out of town,” Bolton wrote, implying that even the president himself doubted his diplomatic gamble with Kim would result in anything substantive. In Bolton’s mind, the entire summit was an exercise in showmanship and publicity—a way to persuade voters back in the United States that Trump was a bold, new leader willing to embrace the unconventional in order to strike a deal of historic magnitude.

Bolton, of course, dismissed the entire concept of diplomacy from the very start. He never bought into the notion that North Korean officials could be talked to sensibly because they were, well, insane. Bolton’s version of North Korea diplomacy was to tighten the economic screws, brandish the U.S. military, and wait until one of two things happened: 1) the Kim regime surrendered its entire nuclear weapons program like Libya’s Muammar al-Qaddafi, or 2) the Kim regime continued to spur Washington’s demands, in which the White House would have no option but to use U.S. military force. Bolton’s record is analogous to a stereotypical linebacker on an obscene amount of steroids—smash your opponent to pieces and don’t think twice about it.

The only problem: North Korea isn’t some helpless punter with string bean arms and a lanky midsection. It’s a nuclear weapons state fiercely proud of its independence and sovereignty, constantly on guard for the slightest threat from a foreign power, and cognizant of its weakened position relative to its neighbors. This is one of the prime reasons Bolton’s obsession with the Libya-style North Korea deal, in which Pyongyang would theoretically discard its entire nuclear apparatus and allow U.S. weapons inspectors to take custody of its nuclear warheads before flying them back to the U.S. for destruction, was unworkable from the start. The Libya-model trumpeted by Bolton was a politically correct way of demanding Pyongyang’s total surrender—an extremely naive goal if there ever was one. When one remembers the fate of Qaddafi 8 years after he traded sanctions relief for his weapons of mass destruction—the dictator was assaulted and humiliated before being executed in the desert—even the word “Libya” is treated by the Kim dynasty as a threat to its existence. As Paul Pillar wrote in these pages more than two years ago, "Libya’s experience does indeed weigh heavily on the thinking of North Korean officials, who have taken explicit notice of that experience, as a disincentive to reaching any deals with the United States about dismantling weapons programs.”

One can certainly take issue with Trump’s North Korea policy. Two years of personal diplomacy with Kim Jong-un have yet to result in the denuclearization Washington seeks (denuclearization is more of a slogan than a realistic objective at this point, anyway). But Trump’s strategy aside, Bolton’s alternative was worse. The president knew his former national security adviser’s public insistence on the Libya model was dangerously inept. He had to walk back Bolton’s comments weeks later to ensure the North Koreans didn’t pull out of diplomacy before it got off the ground. Trump hasn’t forgotten about the experience; on June 18, Trump tweeted that "Bolton’s dumbest of all statements set us back very badly with North Korea, even now. I asked him, “what the hell were you thinking?”

The more accurate question, Mr. President, is “what did you expect from John Bolton,” whose only accomplishment on the North Korea portfolio was the slaying of the only nuclear agreement (the Clinton-era Agreed Framework) that managed to stick for more than a week?