Just How Stable Is North Korea? 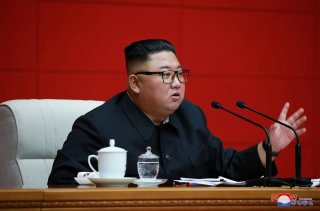 North Korea is once again having food shortages. This is by now a well-known problem, and the government is at least admitting it this time. When North Korea last experienced major food insecurity—in the late 1990s—then-leader Kim Jong Il refused to admit it, as around one million people starved to death around him. Thankfully, current leader Kim Jong-un is admitting reality. This means he is more likely to do something about it. This Kim is no reformer, but at least he seems to care about the state of the economy more than his reclusive, disinterested father.

The cause of this latest round of food insecurity is apparently the weather. The same excuse was used twenty-five years ago. Somehow weather variations do not provoke famine alerts in neighboring South Korea, where I live. The real reasons, as always, are almost certainly political—staggering misgovernment and corruption.

Sanctions will be blamed, but their impact on agriculture is marginal. They are mostly concentrated on elite luxury goods and industrial items of dual-use (those which can be used for either military or civilian purposes), and there are humanitarian carve-outs if the regime would take advantage of them. Food aid would be forthcoming if some kind of oversight could ensure that aid would go to the hungry and not to the military or other regime actors. This was a problem in the late 1990s and likely will be this year too.

This is inherently a political question: foreigners could help but the regime has been unwilling to accept even the slightest accountability mechanisms. Indeed, this crisis is a test of the claim that this Kim is a reformer. If he is, then he will recognize that outside assistance is not simply a blank check. There needs to be some mechanism to ensure its proper use.

The closure of the border with China due to the coronavirus is most likely the proximate cause. North Korea’s corrupt “socialist” agronomy is underproductive and inefficient. To avoid a repeat of the late 1990s famine—the Arduous March—the regime has looked the other way on illicit food imports from China. Informal pathways into northeastern China were set up by North Koreans crossing the border in desperation during the famine. The regime has not much cracked down on them since—likely because these continuing illicit inputs facilitate regime security by helping to feed the population and forestall genuine popular desperation.

A famine is a fairly obvious reason to revolt: if you are starving to death, then you have nothing to lose. If the regime cannot feed its people, then it must either change, take foreign help, or risk bread riots and internal dissent. Even Mao Zedong relented on the Great Leap Forward when the extent of the ensuing famine became undeniable. But the Kim regime of North Korea has rejected political change for decades, likely because it fears opening a pandora’s box of demands from below, including unification. So if “socialism”—despite its corruption and inefficiency—must be maintained, and foreign aid is anathema because of accountability mechanisms, inward “leakage” from China is a useful alternative to keep the population fed and quiescent.

But if that informal backdoor is now closed because of the coronavirus, the system’s internal contradictions start to accumulate. Collectivized agriculture is notoriously inefficient, and in North Korea, rampant corruption worsens this. The regime’s answer last time was to simply take the political risk of allowing mass starvation. And it was indeed remarkable that no violence at scale occurred. This suggests that the regime is indeed stable: it allowed 10 percent of its population to starve in the late 1990s and nothing happened. While a staggering humanitarian catastrophe, it is an astonishing testament to regime strength—if only because the government so successfully terrorizes its own people.

But permitting two decades of inward, illicit China traffic also suggests that the regime knows how risky the late 1990s really was. Kim Jong-un promised on his ascension that such “belt-tightening” would not happen again. This promise likely does not reflect care for the population, but his recognition that a mass famine is an obvious catalyst for regime challenges.

So is the regime stable this time? Will another food crisis in North Korea finally bring popular pushback? Probably not. The regime, amazingly, survived a similar, more extreme crisis twenty-five years ago. It would be foolish to bet against it. North Koreans may actually believe in the Kim cult, or perhaps the sheer harshness of the state against dissent has deterred North Koreans these many years. There has never been a revolt in North Korea in its seventy-five-year history.

But that Kim felt compelled to admit what his father never admitted testifies to the scale of the crisis. Kim promised such an event would never happen, and yet here it is. Economic growth, after his father’s catastrophic mismanagement, has been a legitimizing element of his rule. If push-back, from below or regime elements, ever does occur, this will likely be a part of that narrative. And if food insecurity spirals into a famine yet again, the regime will likely re-open the Chinese door and risk a coronavirus spread.