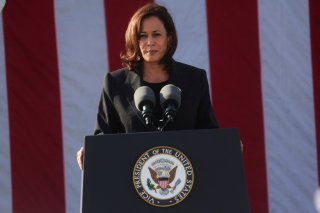 Vice President Kamala Harris is finally going to the border, just not the U.S.-Mexico one.

Per NBC News, the vice president will visit the Demilitarized Zone (DMZ) separating North and South Korea on Thursday. The purpose of the visit is “to show Washington’s commitment to the South’s security,” amid North Korea’s recent missile launches, NBC said.

Harris will make the visit on the same trip to Asia during which she will attend the funeral of the late Japanese prime minister Shinzo Abe.

“Your visit to the DMZ and Seoul will be very symbolic demonstrations of your strong commitments to security and peace on the Korean Peninsula,” Han said, per NBC.

Harris will be the first Biden administration official to visit the DMZ, although Biden visited the location in 2013 when he was vice president. VOA reported earlier this year that Biden had considered a trip to the DMZ when he went to Asia in May, but ultimately decided not to go.

In 2018, President Donald Trump famously crossed the DMZ into North Korea, becoming the first U.S. president ever to do so. That was the third of three meetings that Trump held with Kim Jong-un, although that diplomatic opening never led to any agreement.

“The United States alliance with the Republic of Korea is the linchpin of security and prosperity in the Indo-Pacific.  We take that relationship seriously and we stand with you in the face of threats, knowing that we are aligned on so many issues. We have a shared history, and we have a lot of work yet to do together to strengthen that relationship,” the vice president said in remarks released by the White House.

“I look forward to discussing with you, for example, the work that we are doing as it relates to our investment in innovation and technology; the work we are doing in space; and then, of course, your leadership, in particular, on the climate crisis. I look forward to talking with you about the ambitious goals that you have set based on your personal, I believe, commitment to addressing that issue and to the Republic of Korea’s leadership globally on that very issue.”