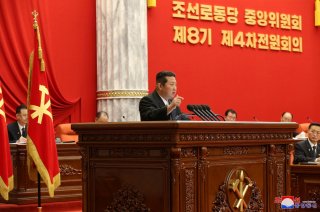 North Korean Supreme Leader Kim Jong-un marked the end of his first decade in power with a speech at the country’s annual party conference on Friday. In his remarks, he underlined that North Korea faced a “great life-and-death struggle” in the coming years, one that would be solved through economic development and raising the standard of living.

The annual meeting—officially dubbed the “Fourth Plenary Meeting of the Eighth Central Committee of the Workers’ Party of Korea”—has been used as a platform for major policy announcements in the past. In 2018, Kim outlined his plan to pursue increased negotiations with South Korea at the conference; the following year, he announced there that he would meet with U.S. president Donald Trump in Hanoi, Vietnam. Although that meeting was unsuccessful, the two leaders met later that year at the Demilitarized Zone (DMZ) demarcating the border between North and South Korea, where Trump became the first sitting U.S. president to enter North Korea.

In contrast, Kim’s speech made no broad pronouncements of a change in strategy and did not directly mention the United States, according to summaries published by North Korea state-run media. The supreme leader briefly mentioned his discussions of “external affairs,” centering on negotiations between the north and the south.

The bulk of the speech was devoted to North Korean economic issues, no doubt in part due to the country’s ongoing economic crisis. Lockdowns from the COVID-19 pandemic have led the country to close its border with China and drastically reduce its imports—policies that have left it more isolated than ever, according to some experts.

Consequently, Kim devoted much of his speech to economic development strategies, arguing that the government’s highest responsibility was to “provide a firm guarantee for implementing the five-year plan and [to] make remarkable changes in the national development and the people’s living,” according to official sources.

However, although he discussed several plans to help revitalize the North Korean economy, including rural land development, Kim stopped short of advocating for broader economic reform, claiming that “non-socialist practices” would not be tolerated.

The North Korean leader also emphasized the role that the country’s military would play in 2022, arguing that it had made significant advancements in 2021 and would continue to defend the country against external threats in the coming year. In spite of its economic crisis, North Korea is thought to have expanded its nuclear and missile arsenals during the pandemic.