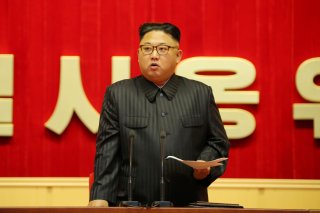 North Korean leader Kim Jong Un often finds himself as the subject of international news headlines. Whether it is his involvement in some activity related to North Korea’s nuclear weapons and ballistic missile programs or his participation in a domestic event or sight visit, few leaders attract as much attention as Kim. But Kim Jong Un is unique among world leaders for the extent to which his health is often the focus of significant global intrigue. Kim is believed to be clinically obese and is thought to lead a lifestyle that involves both frequent drinking and heavy smoking. Given his poor health and likely familial history of cardiac and other health problems, any potential sign or indication of Kim Jong Un’s failing health generates substantial interest.

This interest in Kim Jong Un’s health is understandable: Kim is the leader of a country in possession of nuclear weapons and a large stockpile of chemical weapons, where any instability at the top—including the sudden death of a leader who holds ultimate authority—could have dramatic consequences. The amount of attention paid to Kim Jong Un’s health, however, can at times prove to be excessive and threatens to detract from analysis of events involving Kim, the DPRK leadership, and the country as a whole.

The Threat of Instability

Concerns about Kim Jong Un’s health are not misplaced. Kim is approximately five foot seven, and after years of putting on weight since coming to power in 2011 is thought to now weigh roughly 300 pounds. This would give Kim a body mass index (BMI) of 47, above the threshold of 40 BMI that indicates morbid obesity. This has led medical experts to speculate about a range of chronic medical issues that may plague Kim, including cardiac disease, secondary diabetes, obstructive sleep apnea, hypertension, and elevated cholesterol. This, combined with a history of cardiac disease in the Kim family and his lifestyle that includes both frequent drinking and heavy smoking, means that Kim Jong Un is likely at risk for suffering a severe cardiac event or a stroke sometime in the next ten years.

This is significant given that North Korea is in possession of a growing arsenal of nuclear weapons as well as a large stockpile of chemical weapons. In the event that Kim Jong Un prematurely passes away or becomes incapacitated as a result of a major health emergency, resulting instability could lead to the intentional or accidental use of weapons of mass destruction as factions within North Korea vie for control or as acts of external aggression are undertaken as a means to demonstrate or solidify internal stability and strength.

It is little wonder, then, why any developments concerning Kim’s health—either positive or negative—attract so much attention, including from South Korean intelligence analysts.

Even as Kim Jong Un’s health remains an important topic worthy of attention, too much focus on Kim’s health can be problematic. Given the all-too-real health concerns surrounding Kim, it is entirely too easy to become overly fixated or misled by worrying reports about the leader’s health or to use Kim’s health as a convenient explanation for important developments in North Korea that likely have other plausible explanations.

Last summer, the world was rocked by reports that Kim Jong Un was either in a coma or was brain-dead. This was quickly proven to be false, but the extent to which credible media outlets—even as South Korean government officials were pointing to the absence of important indicators such as North Korean troop movements or heightened levels of alert—took the story and ran with it was telling. The story emerged following a poor translation by a South Korean-based news agency reporting on a possible cardiac procedure performed on Kim, and combining this with a lack of public appearances by Kim in the weeks leading up to the story was seemingly all it took to report on the leader’s death.

A similar trend has continued in recent months. Reports about possible weight loss on the part of Kim Jong Un, along with more gaps between public appearances, have led some analysts to connect recent developments concerning the Workers’ Party of Korea (WPK) to concerns about Kim’s health. This analysis suggests in particular that the creation of a de-facto second-in-command in North Korea is motivated primarily by concerns about the leader’s health and that the new position is largely an emergency one intended to safeguard the country in the event of Kim’s untimely death.

This analysis risks overlooking other possible explanations for the creation of the new position that could prove to important for understanding goings-on in North Korea. The creation of the new position coincided with other changes for the WPK, including a strengthening of the party’s Politburo in policy and personnel decisions. This followed reports that Kim Jong Un had delegated some responsibilities regarding economic and military issues to other top officials, and that he had sent other state affairs issues to his sister Kim Yo Jong. This suggests that the decision to create a new second-in-command position may have been part of ongoing efforts by Kim to delegate some of his workload and responsibilities to other officials.

Alternatively, the establishment of the new position could have been an attempt to create a ready scapegoat upon whom Kim could lay the blame for failures in state policy amid ongoing economic challenges in North Korea.

While the real reason for the creation of the new position may never become clear, the point remains that the use of Kim Jong Un’s health as an easy explanation is limiting. Even though Kim Jong Un’s health can have real and very significant implications for regional security and stability, too much focus on Kim’s health can be detrimental to efforts to fully assess developments in North Korea.