Kim Jong-un Hedges His Bets. How Will Trump Respond? 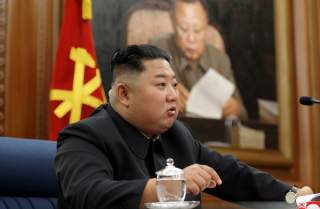 A great deal of apprehension existed throughout the world in anticipation of North Korean leader Kim Jong-un’s annual New Year’s Day address. In mid-December, Kim had promised an ominous “Christmas surprise” because negotiations with the United States about North Korea’s nuclear program had stalled. Although that threat failed to materialize, observers still worried about what Pyongyang might be planning. Concerns mounted when Kim spoke to the Central Committee of the ruling Workers Party at the end of December and declared that his country was no longer bound by its self-imposed moratorium on nuclear and intercontinental ballistic missile (ICBM) tests. Worse, he vowed that his country would soon unveil a “new strategic weapon” to the world.

But that address, outlining Pyongyang’s policy for 2020, still proved to be somewhat anti-climactic. New York Times reporter Choe Sang-Hun notes correctly that Kim “moderated those threats by leaving out the specifics. Mr. Kim did not explicitly say that he was formally lifting the test moratorium or that he was terminating diplomacy. Instead, he said his efforts to expand his nuclear weapons capabilities could be adjusted “depending on the U.S. future attitude. It’s a wait-and-see approach that leaves room for more negotiations.”

The bottom line is that we have not yet returned to the alarmingly confrontational situation that existed during President Donald Trump’s first year in office. At the same time, we are apparently no closer to a solution to the problem of North Korea’s nuclear and ballistic missile programs. Moreover, although the fragile bilateral détente has not collapsed, the process of trying to normalize relations between the United States and North Korea clearly has stalled. Such an impasse cannot continue indefinitely, and when it ends it could do so catastrophically

One underlying problem is that Kim cannot be certain even about the identity of the U.S. president after January 20, 2021. Therefore, the durability of any agreements reached with the Trump administration in the coming year is open to question. That risk is even greater given the hostility that leading Democrats have exhibited toward Trump’s pursuit of a rapprochement with Pyongyang.

If those problems were not enough to make worthwhile negotiations in 2020 difficult, Washington’s overall negotiating strategy is unrealistic. The core demand of the Trump administration, as was the case with its predecessors since the early 1990s, is that North Korea must agree to complete, verifiable, and irreversible denuclearization, or CVID. Given how the United States has treated non-nuclear adversaries such as Serbia, Iraq, Libya, and Syria over the past quarter-century, there is almost no chance that Pyongyang will relinquish its small nuclear arsenal or its pursuit of a reliable ballistic missile delivery system.  In the view of North Korean leaders, possession of such a deterrent may be the only thing that prevents Washington from pursuing a forcible regime-change strategy, as it did against those other countries.

Insisting that North Korea return to nuclear virginity, therefore, is a nonstarter. A more realistic and attainable U.S. policy would be to accept Pyongyang having a small nuclear deterrent, combined with efforts to fully normalize diplomatic and economic relations with that government, despite its odious qualities. Normalization would mean, among other steps, establishing formal diplomatic relations (including the exchange of ambassadors), signing a treaty bringing an official end to the Korean War, the withdrawal of most North Korean as well as U.S. and South Korean troops from areas near the Demilitarized Zone, and the gradual lifting of most U.S. and UN economic sanctions on North Korea.

Unfortunately, there will be fierce opposition in America’s political and policy communities to an accord that leaves Pyongyang in possession of any nuclear weapons. Such opposition is misplaced. As various experts have shown, nuclear weapons may be the ultimate deterrent, but they are not very useful either for intimidation or warfighting—unless a country’s political leadership is willing to commit national and personal suicide. Despite the popular mythology in the West that Kim and the rest of the DPRK’s leadership is “crazy,” there is no credible evidence for that conclusion. North Korean leaders certainly are brutal and ruthless, but their actions are not irrational, much less suicidal.

Kim’s address was hardly an example of cordial diplomacy, but neither was it a fire-breathing, threat-filled diatribe. It epitomized a cautious, hedging strategy, and that’s the best we’re likely to get in the foreseeable future. Washington’s response should consist of steps to revitalize a process of bilateral détente based on more realistic objectives.