Kim Jong-un Might Be Dead—So Who Controls His Nuclear Weapons? 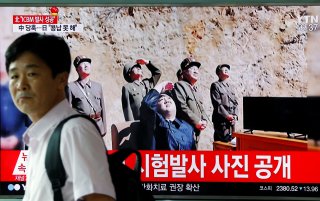 North Korean ruler Kim Jong-un is missing. He hasn’t been seen in public since April 15 amidst rumors of a sudden illness or even his untimely demise. It’s not clear who would succeed Kim, a worrying situation for an absolute dictatorship controlling the world’s youngest nuclear arsenal.

The National Interest spoke to Wellerstein about nuclear threats around the world, from the North Korean chain of command to the U.S. weapons in Turkey. In Part One, Wellerstein discussed the rules and procedures stopping a U.S. President from starting a nuclear war by Twitter. A transcript of Part Two, lightly edited for clarity and brevity, is below.

I know that you've done work on different countries' nuclear command and control systems, and you've written that “nothing…has been authoritatively stated on North Korea’s procedures." I'm curious whether we can say anything at all about the North Korea command and control, especially now that people are concerned about Kim Jong Un's death or incapacitation.

I'm not sure there's a lot out there to go on. I will just say the one thing historians can offer on this.

Nuclear states, when they're new nuclear states—and this includes the United States, and Britain, and India, and China, and the Soviet Union, and all these states—when they start off and they don't have a huge number of nuclear weapons, that tends to mean that the military has a much stronger hand in the question of whether they should be used and how they should be.

One of the trends we see when we look at the comparative history of nuclear command and control is that it starts off relatively military-centric, where the generals have the ability—and yes, they want to get the order generally from the civilian political entity, if there's a distinction there—but they have a lot of practical ability: there aren't codes on the bombs, there aren't locks or anything like that.

They also have a lot of institutional ability, in the sense if there's a crisis, along with their ability to organize for general war and defense, they would have the ability to use nuclear weapons.

My hunch would be that North Korea would be a somewhat similar situation even though my little understanding of North Korea's internal politics suggests that it's always a kind of a give and a take between the military, who have all the guns, and the political forces.

This is a very complicated situation, but I would be not surprised if that was the setup they have, where as with all things, Kim Jong Un would be the ultimate voice on these things, but in practice, the military would have a lot of practical autonomy.

It took quite a long time for the Americans and the Soviets to develop really rigorous systems. While developing systems that would allow continuity of government and continuity of command, they also developed systems that tried to make it more clear thta the military couldn't do it on their own.

All of this is a long way to say, I don't really know about North Korea, but I wouldn't be surprised if their system was one that did give the military quite a lot of leeway in interpreting orders, and was not as formal, as bureaucratized as the modern American system, because it took a very long time for the American system to get where it is.

That's also the kind of system you develop when you have a lot of nuclear weapons.

After that, systems go in different directions. This is why I resist saying that nuclear weapons have a "nature" in this way.

You have a lot of options as you start to think about how you really want the system to play out, but when you're still in the days of "ok, we've got our first ten weapons, oh boy," it's a different footing than when you get to your hundredth weapon or fiftieth weapon.

The North Koreans have had weapons for awhile now, and it's been suggested that they might have as many as twenty or even more. Maybe they're beyond that.

They've had weapons for well over a decade, so it could be that they have a more sophisticated command and control system by now, but I don't know.

President Erdoğan of Turkey has said that it's not fair that Turkey is not a nuclear-armed state. He's had some very strained relations with Washington, and there's fifty H-bombs in a Turkish airport under the control of the U.S. Air Force.

How hard would it be—not Turkey specifically, but any country where U.S. nuclear weapons are stationed—to take control of the weapons themselves for whatever reason?

It's hard to know that because a lot of the details on Permissive Action Links and what kinds of attacks might be successful are, of course, classified...

There's some rumors that some of these systems, if you try to access them inappropriately, they'll break aspects of the firing system destructively. Even if that's not true, there's ways in which the firing system is just not going to work, and you're not going to be able to debug it. It's developed to not be sabotaged.

Could you still, though, take the weapon apart, remove the fuel, make a new weapon, put the fuel in the new weapon? Potentially. That's more likely.

That's going to be a lot harder. You're going to have to have the capability to use however much nuclear fuel is in that weapon, which you may not even know ahead of time. It's, generally, speaking, not a lot...

The idea is that it'll make all that take a long time. If Turkey seized American H-bombs, could they eventually turn them into Turkish weapons? Probably. But a lot would happen before then, that would probably make that not a realistic scenario.

You're talking about the United States bombing the heck out of them. That's warlike behavior.

I think it creates problems to have weapons spread out all over the world for a number of reasons, and I think that's especially problematic and tricky to have them in the hands of a state that's extremely unpredictable, which Turkey has been.

But I'm not really worried them taking American weapons. I think that they recognize that that would be considered an act of war. That would be so unambiguously a problem that no one would ever believe that they could get away with it without suffering immensely.

Does that guarantee it could never happen? Of course not. We've had dictators do things that were immensely stupid in the past...

In a more diverse political system, those decisions don't get implemented immediately. There's places for courts, for advisors, and for legislative houses to sort of object. Things muddle along.

In a dictatorial system, sometimes the stupid decision is the final decision.

The hotspot that people have been concerned about is of course India and Pakistan, who not that long ago were actually shooting at each other, again, which is not ideal. There's a lot of worries about that.

They have very different nuclear doctrines that leave many to wonder whether they could inadvertently end up in a situation that led to nuclear use. The Pakistanis have said that they would use nuclear weapons if they felt threatened by India conventionally.