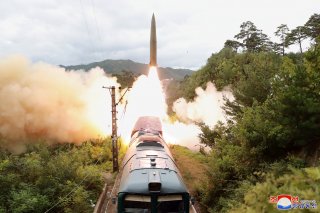 North Korean leader Kim Jong-un spoke earlier this week on the occasion of the seventy-sixth anniversary of the nation’s Workers' Party. According to NK News, Kim spoke the same day in front of nuclear missiles at what was described as the “Self-Defense 2021” meeting.

“The United States has been frequently signaling that it's not hostile to our country, but there has been no behavioral ground to believe that it is not,” Kim said in his remarks, per the Korean Central News Agency (KCNA), as cited by Yonhap News Agency.

“Kim made a speech to a gathering of officials, the KCNA news agency said. State media showed Kim addressing a room full of officials, with no major social distancing, masks or other Covid measures apparent,” per the caption of a YouTube summary of the anniversary speech, posted on the channel of The Guardian. “Kim urged officials to focus on improving citizens' lives in the face of a 'grim' economic situation.”

Kim, in the footage, continues to look thinner than he has in the past, a transformation that has drawn attention worldwide.

The missiles that were visible at the event included what North Korea calls its “hypersonic” missile, as well as its Hwasong-16 intercontinental ballistic missile (ICBM). South Korea and the United States are “analyzing” the weapons that were displayed, per Yonhap.

“Even in the face of adverse environment caused by the global pandemic and the vicissitudes of international situation, the DPRK and the Russian Federation are ... continuously strengthening strategic cooperation with regard to the issue of bilateral relations and other international issues,” the ministry said this week.

Back in late September, North Korea launched what it called a hypersonic missile, although doubts were raised as to whether it had actually moved at hypersonic speeds. It was the third of four weapons tests by North Korea in the month of September.

The Pentagon stated at the time that that particular missile “does not pose an immediate threat to U.S. personnel or territory, or to our allies.” The United States continues to declare frequently that it would like North Korea to return to the diplomatic table.

“Given the detected speed and other features of the ‘hypersonic missile’ North Korea said it test-fired yesterday, it appears to be at an early stage of development that would require considerable time for actual deployment,” the South Korean Joint Chiefs said in a statement at the time of the launch.