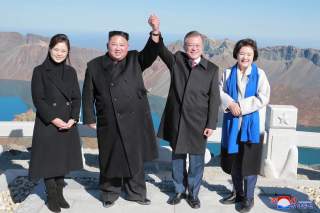 The report on North Korea’s 5th Plenary Meeting of the 7th Central Committee talks at length about nuclear diplomacy and outlines what the future may hold for U.S.-North Korea talks. This emphasis is unsurprising after a year of frustrating diplomatic setbacks and false starts in U.S.-North Korea relations, and many talented analysts are trying to decipher the plenum’s implications for Washington. Yet equally notable is the country not mentioned in the report—South Korea.

The report of the 5th Plenary Meeting is a stark reminder of the depleted role that South Korea plays in negotiations with North Korea. This wasn’t always the case.

Not long ago, South Korea was an important player in nuclear diplomacy. President Moon Jae-in’s outreach around the 2018 Pyeongchang Winter Olympics kicked off a promising year that included two inter-Korean summits. The second of which, in Pyongyang, produced an important military agreement that significantly reduced the likelihood of military escalation along the demilitarized zone. The military agreement was very detailed and laid out mutual, reciprocal steps that North and South Korea quickly implemented. The fine-grained inter-Korean military agreement stood in stark contrast to the vaguely worded joint statement from the U.S.-North Korea summit in Singapore.

After racking up early diplomatic victories in 2018, Seoul had its knees cut out from under it by the failure of the February 2019 U.S.-North Korea summit in Hanoi. South Korea and the United States faced some difficulties getting on the same page in 2018 with the former pushing for more broader relationship improvement with North Korea and the latter prioritizing denuclearization. The tentative draft of the Hanoi joint statement released shortly before the start of the summit indicated that the United States was willing to broaden the scope of diplomacy beyond denuclearization and lift sanctions that were blocking inter-Korean economic projects. This would have brought Washington and Seoul’s diplomatic strategies into closer alignment.

Instead, the collapse of the Hanoi summit resulted in Kim relegating South Korea to the sidelines and prioritized pressuring the United States to lift sanctions. High-level contact at the inter-Korean liaison office in Kaesong ground to a halt, North Korea tested several new types of ballistic missiles and large-caliber rocket artillery, and North Korea conducted artillery drills near the Northern Limit Line—a violation of the inter-Korean military agreement. Kim committed to an all-or-nothing formula for sanctions relief that only the United States could provide by reversing course on UN sanctions that affected entire sectors of the North Korean economy (seafood, coal, petroleum, etc.).

The language of the report on the 5th Plenary Meeting indicates that North Korea is content to keep South Korea in its diminished position going forward. There is room for the United States to make progress, the report clearly links the size and composition of the North Korean nuclear arsenal to U.S. policies, implying that different policies could lead to a smaller arsenal, but the burden of action lies with Washington and there is little Seoul can do to help the situation.

Moon could try to buck the United States entirely and push ahead with a peace regime and violate sanctions to spur inter-Korean economic cooperation. However, such a move would be tantamount to political suicide given high levels of support for the U.S.-South Korea relationship among the Korean people—even given the deeply unpopular U.S. demand for a massive increase in South Korean financial support for U.S. troops deployments. South Korea should continue to abide by the inter-Korean military agreement, but this may become untenable if North Korea continues to take actions that violate the agreement.

Right now, 2020 looks like a grim year for South Korea’s diplomatic outreach to North Korea. Moon Jae-in, who played an important role in moving the peninsula away from the brink of armed conflict and made real progress on reducing the risks of cross-border military escalation, has practically no ability to change the current situation on his own without taking actions that would be risky and politically unpopular. Hope is not a strategy, but it may be Seoul’s only choice for the foreseeable future.