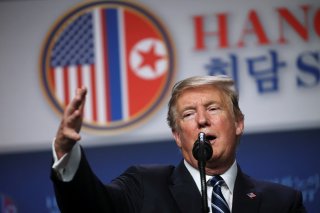 Now that Kim Jong-un has swindled all those who believed (or merely hoped) in his death by reappearing after twenty days of complete absence from the scenes, the question revolves around what his next moves will be, also given the approach of U.S. presidential elections.

President Donald Trump, in spite of “love letters” exchanged with the North Korean dictator, has made clear he is not available for a new summit with Kim Jong-un before November, presumably thinking that another fruitless meeting could be detrimental to his re-election. However, it is highly likely that Trump will present the “rapprochement” with North Korea as his personal foreign policy success, even though, in reality, all summits have not produced any substantial gains. Pyongyang, in fact, has not taken into account any possibility to dismantle its nuclear arsenal or to get rid of its intercontinental ballistic missiles, as the Americans wished: this lack of tangible results, on the contrary, can be used as a boomerang by Trump opponent in the next elections, as a clear demonstration of the current administration impalpability in the foreign policy realm.

Although there has been a promising (and highly celebrated) development in Trump’s posture towards North Korea—from “fire and fury” to the meetings in Singapore, Hanoi and the 38th parallel—this has not translated into major concessions on the two sides. Trump is still stuck to the traditional conception of “complete, verifiable, irreversible dismantlement,” while the North Korean regime wants the lifting of, at least, some sanctions before eventually decide to cooperate on this front. Neither of the two sides is eager to make any unilateral concession, in an endless tug of war made of promises, declarations, and threats. Judging from some declarations made by representatives of the North Korean regime, the time for negotiations is over, as testified by Kim Kye Gwan’s statement, at the beginning of this year, according to which Pyongyang had been “deceived by the U.S.” and his country had only wasted eighteen months hoping things could change.

What remains to be seen is to what extent Kim will remain faithful to his New Year’s Eve speech, in which he threatened to unveil a “new strategic weapon” and return to test long-range missiles. Missile launches (even though short-range rockets), in fact, have recently resurfaced, as a proof of the fact that North Korea has all intentions to continue developing its arsenal. The possibility that North Korea declares “diplomatic experiments” over, by proceeding to a nuclear explosion or to further missile launches, or even to the unveiling of the “new strategic weapon,” is perceptible and could be used as a way to “intrude” into next U.S. presidential elections. For sure the previous meetings have had the merit to bring the parts back to the table of negotiations, but it seems none of the players is eager to play his own cards.

Antonio Fiori is an associate professor of history and institutions of East Asia at the Department of Political and Social Sciences at the University of Bologna.