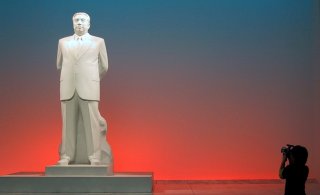 In April, rumors of Kim Jong-un’s untimely death made their rounds across the internet after the North Korean leader disappeared for a while from public view. One question appeared to be on everybody’s mind: who would take his place? Among those believed most likely to rise to the occasion was Kim Jong-un’s uncle, and former North Korean Ambassador to a multitude of European countries, Kim Pyong-il. Kim Pyong-il bears a strong physical resemblance to his father and founder of the Kim dynasty, Kim Il-sung. Moreover, Kim Pyong-il once had strong connections to the military upon his departure to serve as a diplomat in 1988, and boasts the added benefit of coming from the Baektu (Kim family) bloodline. However, are these attributes enough to compete with other potential North Korean successors? Could Pyong-il take control instead of a powerhouse such as Kim Jong-un’s sister, Kim Yo-jong, or a highly respected—and well connected—figure like former head of state Kim Yong-nam?

The National Interest’s Korea Studies team took a deep dive into Kim Pyong-il’s life and career trajectory to find out. What lies in the future for a man once allegedly greeted with cries of “Long live Kim Pyong-il!”?

Kim Pyong-il was born on August 10th, 1954 to Kim Il-sung’s second wife, Kim Song-ae. He was named after an earlier child of the same name who drowned in Pyongyang. According to comments made by Seong-il Hyun, former North Korean ambassador to Zambia, Kim Pyong-il attended Namsan Senior High School, an institution geared toward the children of high-ranking North Korean officials. Kim Jong-il also graduated from Namsan, though the school was later demolished under his leadership in the late 1970’s. Both Kim Jong-il and Kim Pyong-il learned English in Malta. Both also studied at Kim Il-sung University, with Kim Pyong-il earning a degree in political economy.

Though they shared similar upbringings, there was certainly no love lost between the two half-brothers. Allegedly, according to testimonies by a high-ranking North Korean defector, Kim Il-sung intended to split leadership of North Korea between three sons, stating “Let the party go to Jong-il, the army to Pyong-il and the politics to Yeong-il.” Though, it was clear eventually that Kim Jong-il and Kim Pyong-il held political support systems that Kim Yeong-il did not possess. While Kim Jong-il stayed in North Korea to continue studying his father’s work, Pyong-il made his way through a North Korean military academy, and learned how to fly light civilian aircraft in East Germany. Shortly following his stay in East Germany, Pyong-il and may have attended the College of Aviation in Moscow. (Both Kim Jong-il and Pyong-il are believed to be Russian speakers, which makes sense considering Namsan Senior High School mandated Russian language classes.)

By many accounts the relationship between Kim Pyong-il and Kim Jong-il was strained. For instance, some sources stated that “it is over between them for life,” though the reason for the brothers’ fall-out has never been revealed. One theory is that Kim Song-ae, Pyong-il’s mother and Kim Jong-il’s stepmother, attempted to position Pyong-il as a successor to Kim Il-sung. Kim Jong-ju, North Korea’s fourth in command at the time, reportedly took a particular liking to Pyong-il, which threatened Jong-il’s legitimacy as Kim Il-sung’s successor. It did not help that Pyong-il held such an uncanny resemblance to Kim Il-sung that some Polish diplomats referred to them as doppelgangers. These grievances led to a long and bitter power struggle between Kim Song-ae, Kim Jong-ju, and Jong-il which ended in the deposal of Kim Song-ae and Kim Jong-ju from their respective positions and the exile of Kim Pyong-il to various European posts at North Korean embassies.

Conflict between Pyong-il and Jong-il is also believed to have been exacerbated by the Panmunjom Axe incident. Also known as the Korean Axe Murder incident, the conflict began when United States and South Korean officers attempted to remove a tree blocking a United Nations Command checkpoint. North Korean soldiers resisted their efforts, resulting in a violent clash that killed two U.S. Army officers. As tensions rose at the North-South border, Pyong-il was promoted to the position of colonel and continued to rise in stature. This rise caused more friction with Jong-il. The exact reason for Pyong-il’s eventual dismissal is not clear, though it is believed that it is his extravagant gift-giving, loose talk of replacing Kim Il-sung, and party-driven lifestyle was exposed to their father by Kim Jong-il and drove Kim Il-sung to send Pyong-il out of the country.

In 1979, due to his prior military experience and high-rank, Kim Pyong-il was made a military attache at the North Korean embassy to Yugoslavia. Meanwhile, that same year, Kim Jong-il was presented with the Order of Kim Il-sung, the most prestigious award given in North Korea. That honor served as one of the final steps in establishing him as an official successor to his father.

Kim Pyong-il’s diplomatic career officially began in September of 1988, when he was appointed as Pyongyang’s ambassador to Hungary. He was then moved to Bulgaria after Hungary’s political leanings began to shift and the country formally established relations with South Korea. From 1988 to 1994, Pyong-il served as Ambassador to Bulgaria, after which he was moved to a more prominent position in Finland.

Shortly after submitting his credentials to then-Finnish President Martti Ahtisaari in March of 1994, Kim Pyong-il left Finland for an extended period, prompting questions concerning his whereabouts. This was not the first time Kim Pyong-il left Finland with no notice to the Finnish Ministry of Foreign Affairs. For example, according to an account by a high-ranking North Korean defector in an interview collected by Polish North Korean expert Nicolas Levi, Kim’s absence in December of 1993 was due in part to his dissatisfaction with the ways in which Kim Jong-il was leading the country through famine, complaints which he reportedly relayed to his father during this period. Pyong-il’s second leave of absence nearly coincided with the death of Kim Il-sung; he left North Korea shortly before his father’s heart attack and returned only for a short period of time during Kim Il-sung’s funeral. After the death of Kim Il-sung, Pyong-il was rumored to be seeking asylum in Austria, though he quickly denied those claims and affirmed his brother’s right to ascend in their father’s footsteps.

During Kim Pyong-il’s four-year stint in Finland, the North Korean embassy reportedly engaged in the illicit sale of hard liquor and tobacco to generate income—activities that had caused the expulsion of North Korean diplomats from the country some twenty years prior. However, even this stream of income did not stop North Korea from closing its Finnish embassy in 1998 when funds ran out. Sources from Norwegian intelligence indicated that the trail of illicit goods in Scandinavian countries likely had ties to the North Korean embassy in Poland, which happened to become Kim Pyong-il’s next post.

When Kim Pyong-il arrived in Poland, he did so without submitting the credentials required of an ambassador. Eventually, when his credentials were provided to Polish authorities after repeated requests, they were reportedly signed by Kim Il-sung, who had been dead for four years at the time of their arrival. In 2000, Kim Pyong-il was reportedly admitted to an Austrian hospital for heart complications. In 2007, due to restrictions limiting the mobility of Polish diplomats in North Korea, Kim Pyong-il was unable to exit Warsaw without the explicit permission of the Polish Foreign Ministry until the dispute was resolved in 2008.

During his time as North Korean ambassador to Poland, the North Korea government began running forced labor programs employing North Korean citizens to work for Polish companies from roughly 2010-2016. Forced labor programs like those run in Poland are used as a means of acquiring much-needed foreign currency for the North Korean regime. These programs were an extension of labor-exchange between North Koreans and various Eastern and Northern European countries since the Soviet era. By the UN’s estimates, the North Korean government grosses roughly $1.2 to $2.3 billion each year through labor operations in over forty countries. It should be noted, however, that while the Polish embassy in Pyongyang is directly responsible for issuing visas for North Korean laborers, it is very unlikely that high-ranking North Korean representatives residing in Poland are unaware of these operations.

The Rise of Kim Jong-il:

The death of Kim Pyong-il’s father marked a decided path for the young diplomat. In the year leading up to Kim Il-sung’s death, Kim Song-ae was notably reinstated as the chairwoman of the Korean Democratic Women’s Union, a move that likely would not have occurred if Kim Jong-il had effective control over the country as his father weakened. Kim Il-sung’s faith in Kim Jong-il was believed to have wavered at this time, as he began to take more trips to the countryside on his own, monitoring the situation leading up to the great famine of the late 1990’s. After his father’s death in 1994, Kim Pyong-il was not named a member of the funeral committee, though he is reported to have attended the funeral. Additionally, pictures of the ceremony were supposedly edited to exclude the presence of Kim Pyong-il and Kim Song-ae. Months after Kim Jong-il had ascended to power, a Finnish reporter took a picture of Kim Pyong-il in his office and noted that he had not yet hung a portrait of Kim Jong-il, despite portraits having already been issued to embassies abroad.