The Korean War as Allegory 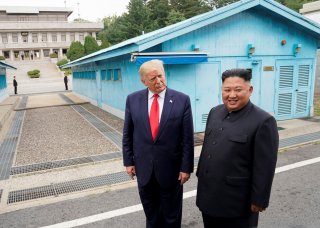 Combat in the Korean War ended on July 27, 1953, with the signing of the Korean Armistice Agreement by representatives from the United Nations Command, Korean People’s Army, and the Chinese People’s Volunteer Army. Yet the core dispute of the war, which of the two Korean regimes would exert sovereignty over the entire peninsula, remains unresolved. The bloodletting on the peninsula has stopped but without a formal peace treaty, “the war” continues. The question is: in what form?

The Korean War became allegory in 1953, an anchoring event connecting the present to a past laden with meaning. Since the armistice’s signing, U.S.-ROK-DPRK relations have been fraught: tensions persist, crises recur, and periodically, violence breaks out. Understanding the motives and behavior of the parties involved in this enduring conflict requires an appreciation of the different interpretations each has of the allegory and the salience of that narrative each state’s strategic culture.

In the United States, the permanence of the Korean War is often forgotten. Each time the brutal and dictatorial North Korean regime “lashes out” or “seeks attention,” Americans are reminded that, technically, the war never ended. The Korean War was a limited war for the United States, one that did not profoundly shape American strategic culture. The salience of the Korean War, moreover, has been diminished by other events and relationships. Washington’s North Korea policy during the Cold War, for example, was couched in its broader effort to contain the Soviet Union and was conditioned by the hub-and-spoke alliance system it fashioned in East Asia. In the post-Cold War era, the rise of China exerts a powerful influence on Washington’s approach to North Korea. The Korean War is allegorical, but it has never been the master strategic narrative for America’s strategy in East Asia.

For the DPRK, however, the allegorical Korean War plays a central role in the regime’s strategic culture. From its inception, the Kim dynasty has sought to avoid dependency on its vastly more powerful allies and to unify the peninsula under its leadership. Juche, the DPRK’s state ideology, fuses these themes, enabling it to exert extensive control over its population and fixing its objectives on unification and the eradication of the southern regime. American intervention on behalf of a corrupt and slavish South denied the dream of unification, the sole condition under which the Korean people could realize their full potential. Unlike the United States, North Korea’s strategic narrative is powerfully affected by the Korean War. As an allegory, the war imparts meaning to American motives and actions: the United States is not only implacably hostile, but its military occupation of the South is an existential threat to all Koreans. The American threat persists and can only be removed through extreme national sacrifice.

While the actual Korean War ended decades ago, the allegorical Korean War will likely be waged well beyond the war’s seventy-fifth anniversary. Because the war is critical to the DPRK’s identity, reinterpretation will come at a steep cost. And because the United States remains committed to its allies’ security, Washington will likely be unwilling to take the dramatic steps that would induce such a reinterpretation. A nuclear North Korea poses significant challenges to the United States and its allies. Strategic stability, sound crisis management, and arms control diplomacy should be the guiding features of Washington’s North Korea policy.

Spencer D. Bakich is an associate professor of international studies and the director of the National Security Program at Virginia Military Institute. He is the author of Success and Failure in Limited War: Information and Strategy in the Korean, Vietnam, Persian Gulf, and Iraq Wars (Chicago 2014).