A Lesson for North Korea: Ukraine Gave Up Its Nukes and Was Invaded 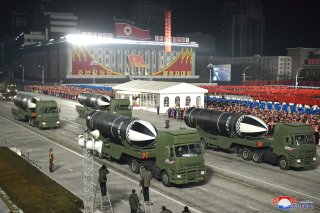 Russia’s savage invasion of Ukraine gave North Korea another opportunity to strengthen relations with its traditional patrons. One of the few countries to back Moscow in the recent UN General Assembly vote, the Democratic People’s Republic of Korea (DPRK) blamed the United States and its NATO allies for undermining “the security environment of Europe by becoming more blatant in their attempts to deploy an attack weapon system.” Russia, declared the North Korean Ministry of Foreign Affairs, merely desired a “legal guarantee for security.”

This argument conveniently reinforces the DPRK’s argument for its missile and nuclear programs. Ironically, Russia’s invasion likely bolsters Pyongyang’s case in another way. The war demonstrates the folly of relying on paper security guarantees.

In 1994, Kyiv yielded the 176 intercontinental ballistic missiles and roughly 1,900 strategic and 3,000 tactical nuclear weapons left in Ukraine after the abrupt dissolution of the Soviet Union. Although the Ukrainian government lacked operational control over this sizable arsenal, it could have reused the nuclear materials. Given uncertainties over its relations with Russia, some Ukrainians advocated for keeping the Soviet stash. However, Kyiv, along with Belarus and Kazakhstan, gave in to international pressure and disarmed.

What Kyiv received in return was the Budapest Memorandum, in which the United States, the United Kingdom, and Russia promised “to seek immediate United Nations Security Council action to provide assistance to Ukraine” in response to an act of aggression, which of course was a meaningless commitment. The result has occasioned more than a little regret in Kyiv. For instance, before Russia’s invasion, former Ukrainian defense minister Andriy Zahorodniuk complained: “We gave away the capability for nothing.” As for the future, “now, every time somebody offers us to sign a strip of paper, the response is, ‘Thank you very much. We already had one of those some time ago.’”

Just as this agreement did not protect Kyiv from Russia, there is no doubt that Kim realizes a peace agreement or similar document would not protect the DPRK from the United States. Indeed, Lee Yang-goo, a former South Korean ambassador to Ukraine, recently argued that North Korean denuclearization has become even less likely. He explained: “North Korea already did not have much willingness to denuclearize. But looking at the graphic scenes coming out of Ukraine, Pyongyang will further solidify their internal and external justification for possessing nuclear weapons.” Indeed, he figured the lesson was even broader: “Now, after this crisis, it will be difficult for any country to make a denuclearization pitch to North Korea.”

The example of Libya, in which a dictator gave up a nascent nuclear program and was later killed when powerful countries aided anti-government rebels, was already compelling. However, Ukraine’s situation could be even closer to that of the Korean peninsula. Imagine the North yielding its nukes and then being invaded by the United States along with South Korea. America’s protestations of peaceful intentions clash dramatically with its extensive violent record—Panama, Grenada, Haiti, Somalia, Yugoslavia/Serbia, Iraq (twice), Afghanistan, Libya, Yemen, Syria.

However, Lee does not stop there. He contended that “they argue nuclear weapons are self-defense, fine. Then we get deterrence too. It’s a matter of survival for South Koreans. If through this, denuclearization negotiations make progress, good. But even if not, this should not get in the way of inter-Korean cooperation any longer.” Nor does Lee see deterrence as only directed at the DPRK. The Republic of Korea sits in the “worst region possibly imaginable.” Take a look at the really big country to the north, hint, hint.

Lee is not alone in this view. A poll last month found that 71 percent of South Koreans support having an independent nuclear deterrent. When asked to choose between that and the deployment of American nuclear weapons in the South, 67 percent picked the first. The reason is simple: South Koreans don’t believe that the DPRK will surrender its nukes and expect China to become an even greater threat in the near future. Mitch Shin of the Diplomat notes another factor: “U.S. President Joe Biden has sent a clear message that he will not deploy any troops in Ukraine, as it could provoke a World War III between nuclear-armed states. North Korea might be learning the lesson that nuclear weapons will provide sufficient cover to its aggression, as the U.S. and other states will be deterred from counterattacks.”

Although the South currently relies on “extended deterrence” from the United States, that will weaken once Pyongyang can accurately target the American mainland. It was one thing to promise to use nuclear weapons when the war would be “over there,” to use Sen. Lindsey Graham’s infamous phrase. But when major American cities could be destroyed, U.S. policymakers will be ever more reluctant to intervene.

Of course, if South Korea moved toward nuclear weapons, Japan would be forced to address the issue. Australia is also viewed as a potential nuclear weapons state. And given the growing threat from China, Taiwan presumably would like to possess its own deterrent. Such a course for the latter would be uniquely dangerous, as openly developing a nuclear program would encourage Beijing to attempt a preemptive strike.

The invasion of Ukraine is an extraordinary tragedy. European relations and security structures have been irrevocably changed. Irrespective of the outcome of the war, the status quo ante is gone forever. Europe’s future almost certainly is more militarized and confrontational.

But the conflict’s impact will not stop there. The seemingly intractable Korean conflict will become even more so. If Supreme Leader Kim Jong-un needed another reason not to denuclearize, Russia’s invasion, nearly three decades after Ukraine disarmed, provides one. And the spread of nuclear weapons might not stop there. Nonproliferation may be the next, albeit unintended, victim of Russia’s aggression.