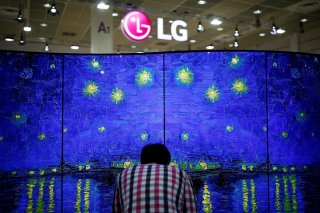 LG Display demonstrated its 97-inch OLED.EX display at the K-Display 2022 event in South Korea this week.

At the OLED.EX Town zone at the show, LG Display showed the panel, which it described as the largest OLED TV panel ever made.

“The newly-unveiled 97-inch OLED.EX display boasts the company’s special ‘Film CSO (Cinematic Sound OLED)’ technology, which allows the display to vibrate and generate the sound directly from the display without separate speakers. A 5.1 channel sound system is embedded into the widescreen, creating a performance that offers a cinematic level of immersion,” LG said.

The Verge provided more details, noting that the panel “vibrates” to produce audio without the need for a built-in speaker.

“LG Display’s 97-inch panel uses the same OLED EX technology found in the latest flagship OLED TVs from LG and others to create a brighter and more accurate image. LG Display calls it the largest OLED panel ever made, although the company’s consumer electronics division, LG Electronics (whose TVs use panels produced by LG Display), already announced a 97-inch OLED TV back in January 2022 without the vibrating sound feature,” The Verge reported.

“Sony has used similar technology called Acoustic Surface in OLED TVs since 2017. These sets also don't use speakers and instead vibrate actuators behind the display,” the site said. “However, Sony doesn't compare Acoustic Surface to 5.1 surround sound. Instead, it encourages users to connect their own gear to the set and to use the TV as the center channel for a surround sound setup.”

However, Ars added that “it's hard to imagine LG Display's gargantuan TV panel can deliver the surround sound experience of a movie theater. But that's not to say the vibration-induced soundscape will be worthless.”

LG Display, which makes display panels for LG Electronics and other manufacturers, is technically a separate company from LG Electronics.

“US pricing will be announced later and although we expect the USD price to come in slightly lower, it should still be in the same ballpark,” the report said.

In RTINGS’ current rankings of the best TVs available on the market, the second, third, and fourth spots are taken up by LG OLED panels from 2022, with the B2, C2, and G2 taking those spots, respectively. Samsung’s first QD-OLED TV, the S95B, is currently ranked #1, with a mixed-usage score of 9.1. All three of the LG OLED TVs have a score of 9.0.