Life After Donald Trump on the Korean Peninsula 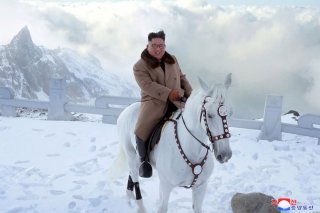 Donald Trump obtained two important things by befriending Kim Jong-un. First, he took Kim out of the international shadows and made him an individual personality in the eyes of world media. He showed that Kim, who is often villanized, had a sister, a wife, children, concerns, and emotions. Second, more importantly, Trump paved the way for Kim to meet with Xi Jinping. China-DPRK relations were really bad in 2016–17 after Kim had executed his pro-Chinese uncle, launched long-range missile tests, and tested what may have been a hydrogen bomb near the Chinese border. Since China is North Korea’s only important trading partner, international sanctions can only influence North Korea in the desired direction when China is on board. Sanctions probably contributed to Kim’s strategic shift in 2018, although he may have planned it all along. He first opened up to South Korea, then with South Korean help to the USA. Trump’s positive response led to two summits and a DMZ encounter, as well as a stream of personal letters—but not to any deal. Yet Kim has much to thank Trump for. He gained stature.

What should Joe Biden do? He should not erase the work that Trump has done. Kim will not willingly return to the sanctioned shadows. If Biden reinstates Obama’s passivity, then Kim will resort to new provocations, as he already hinted when including new missiles in the military parade that was held in Pyongyang on the occasion of the anniversary of the Workers’ Party of Korea. Then the relationship will reset to what it was in 2017, except this time Kim will have less reason to fear convergence between Beijing and Washington. He might even consult Xi the same way his grandfather consulted Joseph Stalin and Mao Tse Tung before launching his invasion of South Korea in June 1950. Biden could end up in a worse crisis with North Korea than any of his predecessors.

So, Biden should inform Pyongyang as soon as possible that if Kim upholds his moratorium on nuclear and missile tests, and speeds his nuclear program visibly down, then the United States will be open to further diplomatic talks, and Biden will look forward to meeting Kim, although only after delegations from the two sides have hammered out a roadmap for a gradual progress with clear milestones toward a step-by-step sanctions relief and also a security guarantee, provided North Korea undertakes a gradual, verifiable and total dismantling of its nuclear facilities.

In this way, Biden may keep the United States in the Northeast Asian game, and maintain its alliance with South Korea. The alternative is to face a drawn-out crisis that may eventually be resolved on Northeast Asian terms, among China, North and South Korea, perhaps with some Russian involvement, but with little regard for U.S. or Japanese interests.