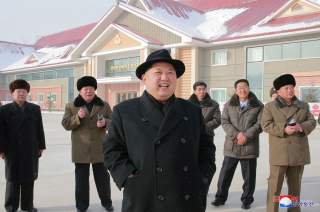 North Korea will not eliminate its nuclear weapons.

North Korean President Kim Jong Un never had any intention of doing so when he met with President Trump in Singapore, June 12, 2018, and signed a loosely worded declaration towards achieving “the denuclearization of the Korean Peninsula.”

Kim certainly seeks to rejuvenate North Korea’s economy, but he won’t surrender his nuclear weapons or long-range missile capabilities to achieve that. At the same time, he is exploiting South Korean President Moon Jae-in’s well-intentioned desire for peace on the Peninsula to divide South Korea and the United States and promote the signing of a peace settlement that would marginalize any future “maximum pressure” campaign. With North Korea’s nuclear forces intact, Pyongyang would be able to coerce the Moon government into concessions, such as requesting the withdrawal of U.S. forces on the Korean Peninsula and proceeding down a path to reunification on terms more amenable to North Korea.

In 2019, North Korea will offer no meaningful concessions on its nuclear and missile programs. There are already questions about the apparent destruction of tunnels at the Pungye-Ri test site, and the potential to re-open the site. Certainly, Pyongyang has frozen nuclear and missile tests, but these can be restarted at any time. Offers to dismantle missile test sites at Sohae ring hollow when North Korea is busy expanding missile and nuclear facilities elsewhere.

Expect the expansion of North Korean nuclear and missile facilities to continue. Pyongyang’s objective now is to expand its arsenal, potentially with a survivable second-strike capability, if it can progress towards some sort of submarine-based capability around the Pukkuksong 1 (KN-11) submarine-launched ballistic missile.

The U.S. national security community has an important question to address in 2019. Absent meaningful progress by North Korea towards denuclearization America will face a choice: either to return to military, political and economic pressure on Pyongyang—a “fire and fury Mark II” campaign—or, accept North Korea’s nuclear weapons status is not going to change, and consider a deterrent strategy in place of diplomacy.

Either policy choice would certainly see greater tensions on and around the Korean Peninsula in 2019, with a commensurate increasing risk of military conflict. South Korea’s President Moon wouldn’t support renewed military pressure on North Korea and will do all it can to avoid war. Could we see a breakdown in the relationship between Seoul and Washington? That would suit Kim Jong Un’s interests nicely.

Malcolm Davis is a Senior Analyst in Defence Strategy and Capability at the Australian Strategic Policy Institute (ASPI) in Canberra, Australia