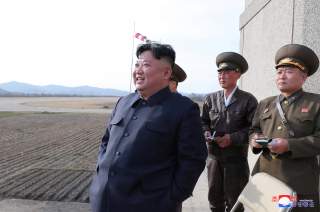 We are in the eye of the storm of U.S.-North Korea relations. Stakeholders are still assessing the Hanoi summit between President Donald Trump and Chairman Kim Jong-un and its aftermath, and all parties seem to be in a state of uneasy equilibrium. The Trump-Moon April 11, 2019 summit seemed largely uneventful, with President Trump telling the press “I think that sanctions right now are at a level that’s a fair level” while not ruling out the idea of easing food shortages in North Korea.

Pyongyang adopted a typically minimalist posture in Hanoi. The North offered a terrible, one-sided deal—attempting to sell Yongbyon to the United States for the third time—in return for totally disproportionate moves by Washington to gut United Nations sanctions. President Trump wisely decided to walk. In the run-up to the summit, the North Koreans had kept U.S. Special Representative for North Korea Steve Biegun at arm’s length, apparently laboring under the misapprehension that they could hold out for a better deal from President Trump. They showed up in Hanoi devoid of technical experts or fresh ideas.

It was useful for Kim personally to hear from Trump’s own lips that he refuses to make a bad deal. Now, it is to be hoped that the North can be induced to work more seriously with Biegun to piece together a workable agreement. South Korean officials have, in contrast to their counterparts from the North, met with Biegun numerous times, and may be in a position to help facilitate discussions between Biegun and Ambassador Kim Hyok-chol or other North Korean officials. U.S.-North Korea working-level talks have the best chance of succeeding if both sides can agree on clear objectives, and a clear path forward to achieving them.

Following the Hanoi Summit, the United States has attempted to demonstrate goodwill and maintain a positive atmosphere to facilitate such discussions. In addition to conciliatory statements by President Trump, America and South Korea canceled their spring Foal Eagle and Key Resolve military exercises, replaced them with a new, smaller exercise called Dong Maeng (Alliance) from March 4-12. At the same time, Washington and Seoul made it clear that this move was specifically aimed at creating a positive atmosphere for denuclearization. President Trump also hastily squelched some new Treasury sanctions, leading to minor confusion as to which sanctions were actually involved.

In contrast, Pyongyang has issued measured, carefully calibrated signals to Washington and Seoul that it is dissatisfied with the Hanoi outcome, and that North Korea’s approach could take a rapid turn for the worse towards both denuclearization and North-South ties. North Korea is restoring facilities at a long-range rocket launch site, Tongchang-ri, that it dismantled last year as a confidence-building measure. Meanwhile, North Korea withdrew its dozen or so personnel from the joint North-South liaison office at Kaesong, only returning several of them to the office after a few anxiety-filled days for Seoul.

In the short term, we are in a de facto double freeze, as long proposed by the Chinese: no North Korean nuclear or missile tests, and no major U.S.-South Korean military exercises. We should not allow frustration with the challenges of dealing with North Korea to lead us to consider this adequate, or to drift into a “strategic patience” posture, which failed so terribly under the Obama Administration.

In any event, this situation is not sustainable. It allows North Korea to continue developing, producing and deploying fissile material, nuclear warheads and missiles. It fails to address North Korea’s chemical and biological weapons arsenal or arrest its export of nuclear or missile technology. Moreover, it ignores the fact that North Korea has a long pattern of causing provocations when it feels neglected—and Pyongyang is already signaling that such a provocation could be forthcoming.

We should continue to seek ways of engaging North Korea: we cannot let Pyongyang draw the conclusion that it has carte blanche to develop its weapons or give it the excuse to act provocatively to get attention. Also, we need to be seen taking every reasonable measure to resolve the North Korea problem through negotiation, which will help legitimize additional sanctions or other coercive measures that we find necessary. In this, we must recognize that “maximum pressure” is a tool and an essential part of U.S. strategy, but by itself insufficient as a means of dealing with North Korea.

Accordingly, we should work with South Korea and, selectively, China, to help smooth a path to continued U.S.-North Korea discussions—emphasizing the need for much improved working-level interaction between Biegun and North Korean interlocutors.

In these discussions, we should emphasize to the North that deeds, not just words, matter, and propose setting up a “pilot program” of North Korean disarmament as a confidence-building measure on the path to complete, verifiable and irreversible denuclearization (CVID). This could involve selecting several North Korean nuclear facilities, including all of Yongbyon, proposing the North dismantle them, and having U.S. and third-country inspectors monitor the operation. If the North balks, its intentions will be (even more) clear. We could consider carefully circumscribed sanctions relief—such as lifting some coal sanctions—in return.

Furthermore, we should continue to coordinate with South Korea and Japan. America should also continue to reassure Seoul and Tokyo that the U.S. nuclear umbrella remains reliable, even in the face of North Korea’s efforts at strategic decoupling through intercontinental ballistic missiles capable of striking continental U.S. targets. This reassurance should be done through continued strategic stability talks and, crucially, an unshakeable U.S. commitment to maintaining a major military presence in both countries.

Additionally, Washington should respond vigorously to the UN panel of experts’ report on North Korean sanctions busting, which painted a grim picture. This could include:

Conducting negotiations is like riding a bicycle: you need to keep moving forward or you will fall over. While the United States considers, prepares and implements more stringent measures vis-à-vis North Korea, perhaps drawn from this menu of options, Washington should make clear that it is still open to negotiating with Pyongyang. Should that lead to a verifiable agreement founded firmly in reality, so much the better. However, should the negotiation bicycle collapse, the international community will be more desensitized to and supportive of sanctions or other coercive measures that Washington of necessity must pursue.

Thomas Cynkin is the former United States Charge d’Affaires to the Conference on Disarmament in Geneva.