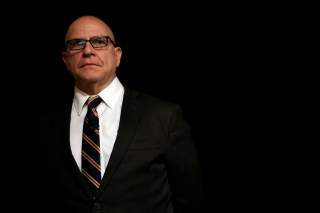 H. R. McMaster has had an illustrious career. In his thirty-four years in the U.S. Army, he earned a reputation among his superiors for being an outside-the-box thinker and an aspiring officer. As a twenty-eight year-old Army tank captain in the 2nd Armored Cavalry Regiment during the 1991 Gulf War, McMaster’s unit obliterated a much larger Iraqi Republican Guard force in the desert, destroying thirty tanks, twenty personnel carriers, and thirty trucks in a span of twenty-three minutes. He dazzled some of his fellow officers during his command of the 3rd Armored Cavalry Regiment in Tel Afar, Iraq, where he routed Al Qaeda militants from a city that was essentially run by the group.

We all know McMaster’s history—it screams “insider” and “national security expert.” Which is why the former national security adviser’s recent comments pertaining to North Korea on the Axios on HBO program are so head-scratching. Some would even call them crazy.

McMaster’s contends that it is “difficult to overstate the threat from a nuclear North Korea.” It is unclear why the retired three-star general believes the North Koreans are so difficult for the world’s only superpower to handle. He provides zero evidence for his assertion. But evidence or not, the statement is just inaccurate.

Sure, the Kim regime violates UN Security Council Resolutions on a weekly (if not daily) basis, remains nuclear capable, and has an atrocious system of concentration camps in place. But at the same time, Washington’s unrivaled military power has kept Pyongyang in a box and prevented it from engaging in the kinds of activities—like an invasion of South Korea or an attack on the United States—that would truly result in a major geopolitical conflagration. The North Koreans have had many opportunities to foment major conventional aggression on U.S. and South Korean troops and have refrained from doing so in fear of the inevitable and exponentially more intense response.

McMaster, for whatever reason, seems to believe Kim Jong-un can’t be deterred and that it’s only a matter of time before the dictator wakes up on the wrong side of the bed and launches a nuclear-tipped ICBM in the direction of Los Angeles. It’s an absolutely ludicrous and unsubstantiated claim buttressed by emotion and overzealous innuendo rather than cold, hard logic. Logic tells a different story: that Kim is quite calculating—a tyrant to be sure, but one who understands that getting into a military exchange with the United States is not a great strategy for regime preservation.

This isn’t the first time McMaster has gone down this road. In an August 2017 interview on ABC’s This Week, he dismissed the very idea that deterrence theory would work on a country like North Korea. His reason: because the Kim regime is inherently evil and has gone to extreme lengths to terrorize its people, sell weapons on the black market, and assassinate its opponents. What McMaster conveniently left out, both in the ABC interview and his remarks to Axios, is that Josef Stalin and Mao Zedong were not exactly running democratic utopias when their countries became nuclear capable either. They were successfully deterred anyway because human beings tend to prize survival instead of going down in a blaze of glory or picking a fight they would be sure to lose. And make no mistake: while everyone would lose in a conflict, the North Koreans would feel the most pain.

McMaster then proceeds to mount a hypothetical—nuclear blackmail. “This regime could say [if U.S. forces] don’t go off the Korean Peninsula, we're going to threaten the use of nuclear weapons,” the retired general explained. And yet this, too, is riddled with nonsense, the biggest objection being that making such an ultimatum would court the very military confrontation with the United States he wants to avoid.

To make matters even worse, McMaster closes out the interview with a laughable idea—threatening the use of military force to compel the North Koreans to eliminate their nuclear weapons. How this is supposed to even work is a mystery, but McMaster is presumably referencing the bloody-nose option he promoted during his time in the administration. The concept is as stupid as it sounds: hit North Korea hard enough to frighten it into handing over its security blanket, but not enough for Kim to retaliate.

The North Koreans, of course, are far likelier to retaliate than stand down. Kim Jong-un wouldn’t be confident that a U.S. military strike would be a one-time operation. Indeed, he would probably interpret the action as the initial stage of a large-scale U.S. military operation designed to topple his regime.

Such a strategy may work in a video game, but it has no place in the real world. Frankly, it’s nuts that a national security adviser of McMaster’s caliber would even suggest such a thing. Giving North Korea a bloody nose is like an armed robber coming to your door and threatening to shoot if you don’t disarm the security system. It doesn’t make a whole lot of sense, or any sense at all.

Prognosticators in Washington remain deeply skeptical about President Donald Trump’s North Korea strategy and whether his diplomatic process with Kim will result in anything. But it could be worse: Trump could have listened to McMaster’s advice.