Memo to Donald Trump: It’s Time to End-Run Your Advisers on North Korea 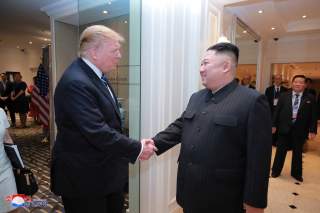 The United States and North Korea are once again locked in a diplomatic standoff over denuclearization and the normalization of U.S.-North Korean relations, which has unfortunately brought to a screeching halt the very promising start North and South Korea have made on building peace and security on the Korean Peninsula. You are in this pickle because in Hanoi you decided to take the misguided, deal-killing advice to go big with Kim Jong-un, instead of following your own instincts to strike a smaller, but still important, deal that could have been reached with some hard bargaining.

If you want to make progress on North Korea, then keep your own counsel and stop heeding the awful advice of others, particularly National Security Advisor John Bolton who has a long history of magical thinking that America can impose its will on other countries. Bolton took a similar approach to Pyongyang during the Bush administration and blew up a denuclearization deal reached by President Clinton. That agreement wasn’t perfect but, in retrospect, would have avoided the predicament we are in today, facing a nuclear-armed North Korea able to attack American cities. There is a reason why the North Koreans call Bolton “the father of their nuclear weapons program.”

Your basic instincts have been right, although you have committed a number of tactical mistakes and unforced errors. Stepping up the pressure on North Korea by imposing new sanctions was definitely the right way to go but promising “fire and fury,” followed by your declarations that North Korea is no longer a threat to the United States and you and Kim have fallen in love, were unnecessary and unhelpful—and quite frankly, made you look silly.

Still, you were right to cut through the red tape in the bureaucracy and to abandon your predecessor’s failed policy of “strategic patience.” Insisting that Kim meet certain preconditions before America would even talk to him was foolish and self-defeating.

Likewise, you were right to ignore the usual tropes from progressives and neoconservatives alike that meeting with Kim legitimized his ruthless dictatorship and gave away something he craved without getting anything in return. North Korea has relations with one-hundred-sixty-four countries, and there is nothing wrong with talking to your adversaries when it advances the U.S. interests. Moreover, your personal diplomacy, combined with the command decision you made to suspend large-scale U.S.-ROK military exercises, helped to solidify a North Korean suspension of nuclear weapons and long-range ballistic missile testing. That suspension by Kim has significantly diminished, at least temporarily, the North Korean nuclear threat to the U.S. homeland.

You also deserve credit for demonstrating respect for Kim and for North Korean sovereignty. You rightly signaled to him at the Singapore summit that you were ready to transform the U.S.-North Korean political relationship in parallel with denuclearization. Such gestures should help Kim to see that the United States does not pose a threat to his survival or the security of his country—something that is critical to his willingness to take bolder steps toward denuclearization. Peace and denuclearization go hand-in-hand—you can’t have one without the other.

In the run-up to the Hanoi Summit, it looked like you had embraced a phased approach to denuclearization with partial steps and mutual concessions from both sides. Following this approach would have sent a strong signal to Kim that your administration was not going to run roughshod over his concerns. Why you abandoned it in Hanoi in favor of Bolton’s all or nothing gambit is perplexing. There was no political upside either for you or for President Moon Jae-in who now confronts an angry Kim unwilling to pursue further reconciliation with South Korea.

All this said, in less than two years your administration (though most of your critics in the foreign-policy establishment are loathe to admit it) has made far more progress in advancing diplomacy with North Korea than the Obama administration made during its eight years in office. During this same period, your outreach to Kim empowered him and South Korean President Moon to make historic strides toward reconciliation and peace on the Korean Peninsula.

But now you’re stuck and struggling to find a way back to the negotiating table with North Korea because you bought a bill of goods from your national security adviser. If Bolton were calling the shots, then he would use military force to overthrow—with disastrous results for the country and your candidacy—Maduro and the Mullahs and push for regime change in North Korea. Your campaign of maximum pressure will not force Kim to accept a proposal for complete, verifiable, and immediate denuclearization no matter how much sanctions relief you offer in return.

Hard bargaining and being tough in negotiations are, of course, the right way to go. But if you are truly committed to defanging the North Korean threat to America and to our allies and ending seventy years of hostility on the Korean Peninsula then you need to demonstrate that you and not Bolton are the president and that your summitry can lead the United States—as well as North Korea—down that road.

It is time for you to take another bold step to see your initiative through to a successful conclusion. First, you should send a personal message to Kim reaffirming your commitment to the positive principles in the Singapore summit declaration and your willingness to meet again if he is prepared to empower his representatives to engage in serious negotiations with their U.S. counterparts to prepare for the summit.

Second, you should hold out the possibility that, if these negotiations make serious progress, you would be willing to go the extra mile and hold the summit in Pyongyang to close the deal. This decision will be met by howls of protest from your domestic critics, particularly from the foreign-policy establishment, who will see it as a major concession. But your steadfastness will demonstrate the dramatic lengths to which you are willing to go to secure American interests and those of our allies and to foster world peace after almost six decades of hostility on the Korean Peninsula.

Third, you need to accept the reality that there is no immediate grand bargain to be struck of complete sanctions relief for complete denuclearization—the mutual distrust and hostility are too great to eliminate in one bold stroke. Bolton knows that, and it’s why he has supported that approach. The only way forward is a series of small agreements where both sides take positive steps in parallel. Contrary to what your critics have said, the so-called “freeze for freeze” has been a win-win proposition for both sides, and particularly the United States, since Pyongyang was well on the way to building more powerful hydrogen bombs and more capable missiles.

The small deal that was on the table in Hanoi, dismantlement of the large Yongbyon nuclear facility in return for lifting some sanctions, should serve as the basis for further bargaining. Our objective should be to secure dismantlement, particularly the immediate and irreversible disabling of key facilities so they can never be used again. In return, we should be willing to allow more limited sanctions relief than the extensive demands made by Pyongyang. In particular, we should relieve those sanctions that will give South Korea greater leeway in providing assistance to Pyongyang and promoting North-South reconciliation.

We should also be willing to quickly move forward with steps to begin thawing the political relationship between the United States and North Korea. One is a joint declaration that the Korean War is over and the immediate beginning of negotiations for a peace agreement to replace the temporary armistice that halted the war. Another is the establishment of diplomatic relations between our two countries. A third step is people-to-people exchanges between the United States and North Korea, including reuniting Korean-Americans with their relatives in the North. These measures would start us down the road to ending what the North Koreans call our “hostile” policy towards their country.

All of this should be linked to a second phase agreement that would move the countries well down the road of denuclearization: a commitment to negotiate before the end of your first term a halt to the production of all bomb-making material in North Korea in return for the further lifting of U.S. and international sanctions. This agreement would also launch a longer-term process of capping and rolling back all North Korean missiles designed to carry nuclear weapons. The two sides could also take other steps to demonstrate that the thaw in bilateral relations is moving ahead. These could include expanded cultural, educational, and commercial contacts and others to reduce the North Korean conventional military threat on the peninsula. A thawing bilateral relationship will also enable us to start a dialogue on human rights with Pyongyang.

Should you adopt this approach, your critics will cry that you have caved to North Korea, but the politics are in your favor. It is a time-honored tradition for critics of U.S. policy towards North Korea—especially Republicans—to attack each and every agreement as not achieving enough and claim they could have done better. But most Republicans will keep quiet since you are the leader of their party; some Democrats may grouse, but others will applaud your efforts. They understand that the overwhelming majority of the American people—Republicans, Democrats, and independents alike—will support an approach that will bring peace and security to the Korean Peninsula and eliminate the risk that another American president might have to send U.S. forces into harm’s way.