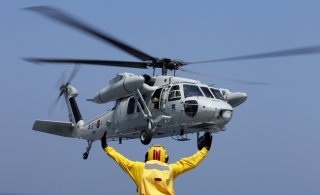 The backbone of South Korea’s power projection at sea is currently represented by the country’s two Dokdo-class amphibious assault ships. Though only the lead ship of the class, the ROKS Dokdo has been completed, another two ships are planned, and one is currently thought to be undergoing sea trials. These ships facilitate ship-to-shore landing operations and can deliver approximately 750 South Korean Marines as well as armored vehicles and artillery pieces to shore via helicopter, or by air cushion landing craft via the class’ well deck.

The Dokdo-class caused a bit of a stir when it was named, as Dokdo is the Korean name for the Liancourt Rocks, a mostly uninhabited group of small rocky islands in the Sea of Japan. Though the islands are administered by South Korea, Japan disputes South Korea’s sovereignty over the islands.

The new ship, tentatively called the LPH-II, is slated to have double the displacement of the Dokdo-class, tipping the scales at 30,000 tons. According to reports, the new vessel will have significantly greater carrying capacity when compared to the preceding Dokdo-class vessels—approximately 3,000 Marines, and possibly up to twenty armored vehicles. Once completed, the LPH-II will be the first time that South Korea can count a light aircraft carrier-type ship in their navy.

Though Seoul’s new aircraft carrier-lite would have a smaller displacement than the United States’ America-class, it would actually be slightly greater in size than Japan’s similar Izumo-class of helicopter destroyers—and could be seen as another point of conflict in the contentious Seoul-Tokyo relationship.

More Birds in the Sky

Both the Dokdo-class and Seoul’s small new carrier will have the necessary deck treatments to facilitate F-35B operations, and the new LPH-II could carry up to sixteen of the stealth fighters. The ability to host allied countries’ fighters onboard is a huge tactical advantage for all countries that operate the stealth fighter.

Despite the sometimes rocky relationship with Japan, the island nation was recently given the green light to go ahead with a $23 billion deal that included 105 F-35 fighters, making them the largest F-35 operator besides the United States. Who knows—maybe American and Japanese pilots will soon land on South Korean aircraft carriers.