Moon Jae-in Is Getting Tired of North Korea's Growing Aggression 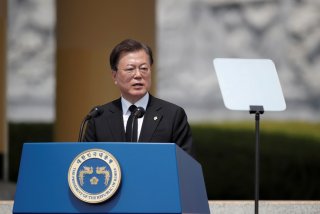 President Moon Jae-in is tired of taking abuse from the North—and he’s starting to lose his patience.

The South Korean president has done everything in his power to keep a cool head. He has demonstrated stoicism and a virtually unlimited calmness despite North Korea’s ever more brazen antics. When Kim Jong-un’s sister, Kim Yo-jong, ordered the severing of phone lines between North and South Korean officials, Seoul took an evenhanded stance and tried to stay above the fray. "(We) can't let the promise of peace on the Korean Peninsula, which I and Chairman Kim Jong-un made in front of 80 million Koreans, revert,” Moon told reporters on June 15.

When Pyongyang demolished the inter-Korean liaison office this week and published pictures showing the modern glass building in a pile of smoke, dust, and rebar, the Moon administration kept its rhetoric fire at bay and expressed disappointment at the abrupt turn of events. Moon even reportedly dispatched two of his senior officials on a mission of shuttle diplomacy with the North to arrest the spiraling cycle of escalation before it got out of control. That attempt was surreptitiously rejected by Pyongyang and laughed at by Kim Yo-jong as a “tactless and sinister proposal.” The Kim regime’s message to the Moon administration: drop dead.

The Blue House has shown remarkable restraint. But there is only so much one can take before throwing patience out the window and standing up for yourself. “We won’t tolerate the North’s unreasonable words and acts anymore,” a South Korean presidential spokesman said in reference to the younger Kim’s diatribes. The South Korean military is getting restless as well—hours after the Korean People’s Army General Staff released guidance that nullified the last pillars of the 2018 inter-Korean military agreement, the director of operations for the South Korean Joint Chiefs of Staff warned Pyongyang to tread lightly. "These moves thwart two decades of efforts by South and North Korea to improve inter-Korean relations and to keep peace on the Korean Peninsula,” Jeon Dong-jin retorted. "If the North actually takes such a move, it will certainly pay the price for it.”

These aren’t the kinds of words one is used to hearing from the Moon government. Moon himself has been exceedingly careful with his words—perhaps to a fault. As Leeds University’s Aidan Foster-Carter observed more than a year ago, "Turning the other cheek is a Christian virtue, but politically it sends all the wrong signals...South Korea always gave far more than it received on all fronts—except insults, whereby [in contrast it never reciprocated.” His point is well taken. Moon started to look like the high schooler who approaches his crush every week and asks her out to the movies, only to walk away humiliated every time. At some point, the entire process gets redundant and one’s pride and sense of self gets mortally wounded.

Moon won’t give up on dialogue entirely. His entire presidency and personal reputation as a statesman is prefaced on talking directly with North Korea in pursuit of a solid and mutually-acceptable peace regime on the Korean Peninsula. He deserves enormous credit for being headstrong in his noble drive towards a permanent peace, notwithstanding all of the hitches he has hit along the way.

But as North Korean troops begin filing back to their guard posts along the DMZ, it’s becoming increasingly unavoidable for Moon to allow the North to continue punching him like a piñata.