Moon Jae-in Should Push Back on North Korea's Insulting Comments 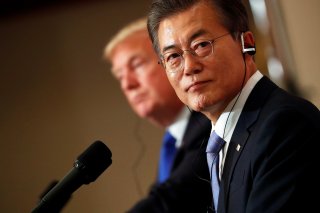 “We can hardly repress astonishment at his shamelessness,” she declared of Moon. “He cannot feel sorry for being ‘praised’ as a parrot raised by America.” Seoul’s rejoinder was less than overwhelming. The Unification Ministry expressed “strong regret” over her blast. Sounding like Miss Manners, the ministry insisted that the two states should respect “the rules of minimum etiquette in any circumstance.”

Kim soeur evidently is not aware of that standard. Rather, she appears to have taken the position of DPRK Defamer-in-Chief. After the South Korean president’s office criticized North Korean live-fire exercises last year, she denounced Seoul’s actions and statements for being “so perfectly foolish in detail.” She added that “Such a gangster-like assertion can never be expected from those with normal way of thinking.”

Of course, Pyongyang has done worse in the past. Only last year it also blew up the two Koreas’ liaison office, constructed at considerable expense by Seoul, amid the usual hail of invective. In years past the North routinely threatened to turn Seoul into a “lake of fire.” The DPRK’s verbal fireworks bring to mind the old adage that sticks and stones may break my bones, but words will never hurt me. As long as the DPRK military is not lobbing artillery shells, missiles, and nuclear bombs at the ROK, perhaps a few rhetorical bombshells aren’t so bad.

Although the lack of “minimum etiquette” might seem to be of little account, it demonstrates that North Korea does not fear retaliation. Although constant claims about lost credibility should be taken with more than a few grains of salt, Pyongyang’s willingness to turn the South into a national pinata suggests a serious lack of respect. For instance, last year Seoul threatened to “respond strongly” if the North continued “to worsen the situation” after destroying the liaison office, but did nothing. Such inaction encourages the DPRK’s rhetorical insults and challenges. And might be taken in Pyongyang as evidence that South Korea would not respond to violent provocations as well.

Seoul should stop allowing such behavior to go unpunished. However, responding rhetorically would be a losing game. The Kims have the world’s most comprehensive lexicon of insults. Who can forget when the North called President Donald Trump a “mentally deranged U.S. dotard”? Two years ago Pyongyang termed Joe Bien a “rabid dog” and a “fool of low IQ.” Who can top such abuse?

Nor would it behoove Seoul to try. Certainly, Moon would never be convincing in the role of verbal warrior. Moreover, lowering himself to North Korea’s level would diminish the ROK’s claim to regional and global leadership. Nor would even well-placed insults have much impact on the North or its behavior.

The South should follow a different strategy. The Moon government should develop its own repertoire of threats. What would irritate the North Korean leadership? What would make it uncomfortable? What would embarrass the Kim regime? What would undermine its control? Surely there are a variety of steps that could be taken—political thrusts which would fall short of sparking a military challenge.

For instance, the government could propose repealing or amending the ban on leafletting the North. The measure was always ill-considered, violating South Koreans’ right to free expression. Moreover, the best hope for change in North Korea is its own people’s growing awareness of the world. Sending information into the Hermit Kingdom is one means of raising awareness. Even if the Moon government believes the impact of such activities is likely to be slight, Pyongyang’s hysterical reaction suggests that the Kim regime thinks differently. At least the Seoul government should be authorized to suspend the prohibition.

South Korea also could respond with new propaganda efforts—signs and loudspeakers at the DMZ, balloons and other forms of messages sent into the North by the South Korean government, preliminary work to set up a Voice of Korea news service to broadcast into the DPRK, calls for human rights investigations by NGOs, the United Nations, and other international organizations, and more.

All these likely would prompt another verbal meltdown by North Korea—no doubt, Kim Yo-jong would look up new barbs and slurs—but such a reaction would demonstrate the long-term deterrent value of a tougher response, with the hope of ultimately forestalling future hostile tirades. If each rhetorical barrage generated another painful response, Pyongyang might eventually turn down the volume. Seoul should, of course, modulate its use of such tactics depending upon the issues at stake and Pyongyang’s likely responses. Nevertheless, after suffering silently throughout his presidency, Moon should demonstrate that his government is prepared to challenge the DPRK’s misbehavior.

The objective would be to communicate “no more Mr. Nice Guy.” South Korea has made very clear its commitment to peace. The Moon administration has gone out of its way to press for cooperation and reconciliation. The South should maintain these positions but demand respect—not “minimum etiquette”—from the North. Seoul should make clear that it will no longer abase and humiliate itself in the face of DPRK recalcitrance and spite. If Pyongyang doesn’t want to respond appropriately, then so be it. It can suffer through economic failure while the South moves on to directly address the North Korean people. If that makes the Kims, frere and soeur, unhappy, they should change their insulting behavior.

Of course, Moon might fear that taking a tough stand would risk triggering retaliation, creating a crisis, or perhaps even sparking another war. However, for the North, rhetorical barrages appear to be a substitute for real combat, not a trigger for conflict. The regime is incorrigible, not, despite its popular reputation, irrational.

The three ruling Kims, though all willing to use violence, always did so with cold calculation in pursuit of specific objectives. Never did the North risk war after being hit by a verbal brickbat. The Kims did not act carelessly—or even recklessly despite their ruthlessness, always pulling back from the brink when a retaliatory spiral threatened. Even the most outrageous provocations, including seizure of the USS Pueblo, ax murder of American soldiers in the DMZ, the sinking of the South Korean vessel the Cheonan, and bombardment of Yeonpyeong Island, did not result in a general war.

Responding, even in a small way, to North Korean misbehavior would communicate that Seoul is no pushover. That should be backed by the continued development of armed forces capable of independently deterring any DPRK attack. The ROK should steadily take back control of its security and future.

Of course, encouraging peaceful dialog, despite the North’s hostile behavior, should remain a priority. The Moon government should continue to press Washington to loosen sanctions sufficiently to allow the South to develop independent initiatives with Pyongyang. Seoul also should encourage the Biden administration to adopt a realistic negotiating strategy, in contrast to the all-or-nothing demand made by the Trump administration. But these stands would be more persuasive if Seoul took a tougher stand toward the North.

Despite Moon’s best efforts, North Korea is likely to remain “the impossible state,” as christened by Victor Cha of CSIS. President Moon shouldn’t give up seeking to develop a better bilateral dialog, but he should stop turning his nation’s other cheek. Finally pushing back against the DPRK could, paradoxically, prove to be the start of a more serious bilateral relationship.