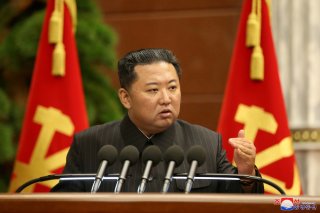 A propaganda video released last week by the North Korean government depicted leader Kim Jong-un riding a horse, although it did not reference the regime’s recent missile launches.

According to CBS News, the video featured the North Korean leader “gazing wistfully out to sea from atop a white horse.”

The New York Post reported that the propaganda video was titled  “2021: A Great Victorious Year,” and that the video praised the North Korean leader as both “motherly” and “fatherly.”

Elsewhere in the video is a statement that Kim’s “body has been completely withered away,” an apparent reference to Kim’s weight loss in 2021. NK News reported in June that Kim had lost a noticeable amount of weight and that foreign intelligence agencies were likely monitoring the situation.

“If [the sudden weight loss] is due to a health condition though, the jockeying for his succession may already be happening behind the scenes, and that volatility could be trouble for the outside world,” Vipin Narang, associate professor of political science at the Massachusetts Institute of Technology (MIT), told that news outlet at the time.

ABC News reported in October 2021 that South Korean intelligence believed Kim had lost forty-four pounds. He was not believed to be suffering any serious health issues at that point.

North Korea continues to develop nuclear and ballistic weapons while conducting numerous missile tests, according to a United Nations report, cited by the Associated Press over the weekend.

The report added that cyberattacks have been a major source of revenue for the Kim regime in recent years.

Wired had reported last week about an unnamed American hacker who managed to take down much of North Korea’s internet infrastructure. The hacker, who goes by the handle P4X, had claimed responsibility for attacks, which he claimed were in retaliation for North Korean hackers hacking him. The hack appears to have wreaked havoc on North Korea’s relatively primitive internet.

“I want them to understand that if you come at us, it means some of your infrastructure is going down for a while,” the hacker told Wired, adding that the U.S. government hadn’t been much help when he reported the hacks to them.