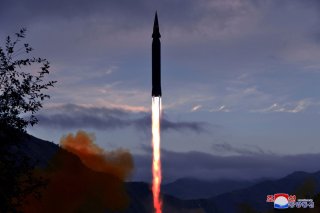 Authorities in Japan and South Korea reported detecting a missile launch off of the east coast of North Korea on Wednesday, an indication that Pyongyang had conducted its first missile test of 2022.

The launch was initially reported by Japan’s coast guard, which indicated that the projectile fired could have been a ballistic missile. The country’s defense minister, Nobuo Kishi, later announced that it had flown for roughly 500 kilometers (310 miles) before landing in international waters.

South Korean military observers claimed that the missile had been launched shortly after 8:00 am from land. The country’s Joint Chiefs of Staff declined to provide additional information but said that they were “conducting a detailed analysis” in cooperation with the United States.

The missile launch comes shortly after the conclusion of North Korea’s party conference, at which Supreme Leader Kim Jong-un outlined his plans to develop both the country’s military capabilities and its economy, rather than emphasizing one over the other.

Although Kim committed to continued defense spending, the meeting was mostly focused on dealing with the economic consequences of the COVID-19 pandemic, which has devastated North Korea’s economy. In order to keep North Korea’s fragile health system from collapsing under the weight of a coronavirus outbreak, Pyongyang instead elected to close its border with China, virtually eliminating all international trade and leading to a severe economic crisis—a crisis complemented by successive natural disasters in 2020 and 2021.

In spite of its economic woes, the North Korean government has pushed forward with military development. It carried out a number of missile launches throughout 2021 and announced in October that it had tested a new submarine-launched ballistic missile (SLBM) for the first time since 2019.

The new missile test comes as the United States and South Korea have pushed for renewed negotiations with Pyongyang. Liberal South Korean leader Moon Jae-in, whose term expires in May 2022, has made negotiations with the North a centerpiece of his foreign policy and has made several concessions to the north, including banning the practice of balloon launches in late 2020, in attempts to return Pyongyang to the negotiating table.

South Korea’s Yonhap News Agency reported on December 29 that the United States and South Korea had agreed on the text of a peace agreement to formally end the Korean War, a ceremonial step towards peace on the Korean peninsula. However, North Korea has declined to participate in negotiations toward an inter-Korea peace agreement, citing “hostile” attitudes from Washington and Seoul.