No Matter Who Wins in 2020, North Korean-U.S. Relations Will Remain Stuck 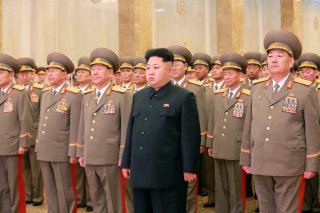 No matter what changes the Trump Administration or a president-elect Biden makes, U.S.-North Korean relations are unlikely break out of the pattern of the past several decades of alternating between moves toward détente and renewed tensions. Further summit talks and negotiations are possible as is the testing an ICBM or a nuclear weapon. Neither will likely change this pattern because situation the Kim Jong-un regime finds itself in have not changed.

The United States wants to remove the threat North Korea’s nuclear weapons pose and would like to see the country open-up, mend relations with Seoul and act like a responsible member of the international community. Pyongyang would like to have formal diplomatic relations with United States and a formal peace treaty, if for no other reason than to drive a wedge between Washington and Seoul. It would like to see the economic sanctions which are hindering Kim’s hopes of economically modernizing his country lifted. It would also like to be free from too much dependence on Beijing as its economic lifeline. However, it is highly unlikely to give up its nuclear weapons which protect it from any American or possible Chinese or South Korean temptation to implement regime change.

More fundamentally Pyongyang cannot afford to open up too much to South Korea or the United States or carry out radical reforms. It has been able to have secure control over the society it governs. But in order maintain it there has to be a threat of conflict to support the narrative that only the military strength of the DPRK and its heroic leadership that has kept half the Korean people free from imperialist control and protected them from being violated by foreigners. Further, Kim cannot allow enough outside exposure for his people to fully realize that their hardships are imposed on them by the failings of their own leadership and that—rather than admiring their independence—their Southern compatriots see them as backward, embarrassing and at times pitiful.

In short, the direction of U.S.-North Korean relations comes down to the question-what does Kim Jong-un believe he needs to do to maintain his grip on power? For the regime during the past several decades that answer has been fourfold. First, secure any aid or assistance Pyongyang can while maintaining its information cordon. Second, create and maintain a state of immanent war without starting one. Third, find ways to make sure the elite are well taken care of and the economy does not collapse—all without opening the country and without carrying out reforms that could undermine the regime. Fourth, build up Pyongyang’s military strength, especially relying on WMD to protect itself from outside intervention and to impress its own people with its strength.

The United States had not been able offer a realistic path out of the corner the regime has painted itself into. Instead it sticks to an unrealistic policy of unilateral disarmament for North Korea without any assurances that the leadership and the elite dependent on it will be able to stay in power and protect their privileges. Barring an unforeseen event, whatever happens—whether it is more détente or more tension—will not lead to significant long-term change in the relationship between the two countries.

Michael J. Seth is a Professor at James Madison University.