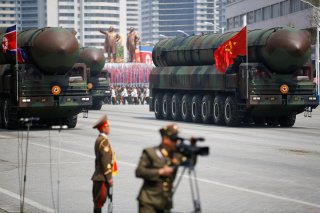 The North Korean regime around supreme leader Kim Jong-un loves anniversaries. Regularly on a fifth or tenth anniversary of some critical moment in regime history (faked or not), the North Koreans stage rallies, parades, elaborate meetings, and other celebratory events. These are of course highly staged. The drama is entirely false; nothing is left to chance in a system as tightly policed as this Orwellian tyranny.

Outside analysts assume that these events are signaling – both to internal and external audiences. To the population, they show off the strength of the regime. This is obvious, but still valuable. North Korea is significantly poorer and worse off than South Korea, and North Koreans know this. The parades and their weapons demonstrate what all the sacrifice has been for. North Korea may be poor, goes the story, but it is independent and fierce, not like the corrupted, Americanized South. When I traveled to North Korea, our tour’s minders repeated this line regularly. So for a people struggling under food insecurity, rolling brownouts, developing world poverty, and so on, this is a great show. Dramatic marches of hardware and goose-steeping soldiers is the North Korean version of Triumph of the Will. It also conveniently tells the population that the state is so powerful that any revolt or resistance is futile. The state is all-powerful.

To the rest of us, these events show off the regime’s military might to reinforce deterrence. For all its Stalinist bellicosity and iconography, North Korea is poor and conventionally weak. Without nuclear weapons, it is widely assumed that North Korea would lose any serious conflict with the U.S. and South Korea. Its advantage in mass – the sheer number of soldiers it can muster – pales in comparison to the enormous qualitative advantages of its opponents. So dramatic marches and nuclear missiles rolling through downtown Pyongyang, the capital, reminds us that the regime will not go down without a brutal, costly fight. For this reason, the parades frequently highlight North Korean nuclear weapons too.

The next big event of this kind is on October 10 - the seventy-fifth anniversary of the foundation of North Korea’s ruling Workers Party. This is ironic. The party is not one of workers but of loyalist ideologues and bureaucrats with little exposure to the party’s ostensible proletarian heritage. The party also does not rule; Kim and his extended clan do. North Korean governance is more like the mafia than a one-party state of Stalinist yore. North Korea is a monarchy undergirded by a family-cronyist network at the top, and the party exists to ensure compliance, indoctrinate, and mobilize. The party does engage not policy construction or even Lenin’s ‘democratic centralism.’ All the Marxist party iconography you will see this week – hammers and sickles redolent of communist parties of the twentieth century – are just holdovers, totally irrelevant to the regime’s actual ideology, which is a bizarre mix of hypernationalism and theocracy around the Kim family as semi-divine. But no matter. Ideological consistency ceased to matter decades ago when the Kim family personality cult displaced any rigorous ideational structure.

To celebrate this anniversary, the regime is gearing up for a major parade in Pyongyang, through Kim Il Sung Square, the heart of the state. The preparations suggest a mega-event, including rumors of the revelation of a “new strategic weapon.” North Korean leader Kim Jong-un is apparently upset at the failure of peace talks with the Americans. Unveiling a new intercontinental ballistic missile – what we assume the regime means by ‘strategic weapon’ – would be a useful threat to the Americans to take the process more seriously. Given that these mega-events tend to capture at least some foreign media attention, unveiling a new missile here would likely show up in Western headlines too. Given that U.S. President Donald Trump has likely given up on negotiating with North Korea, plus North Korea’s established practice of trying to intimidate new leaders (Joe Biden, should he win), my estimate is that the North Koreans will roll out the new missile. There is some early evidence for this.

The take-away from these events is mixed at best. North Korea, and Stalinist states before it, have done these sorts of muscled-up parades for years, so it is not clear if they still intimidate any foreign countries. They may be more ‘deterrence theater’ for domestic consumption than genuine deterrence of foreigner threats. Indeed, there is a downside to displaying North Korea’s fanciest hardware, because foreign analysts viewing the footage can possibly get new and better images of the North’s weapons. North Korea’s military is, not surprisingly, quite opaque. These parades are a rare chance to see it in action, both new systems and the continued use of obsolete hardware.

Politically, the parades and displays have a kremlinological value too. We can see who stands on the relevant balconies and parapets in relation to whom. Most crucially, we estimate the relative power of Kim underlings by their physical proximity to him at public events like this.

Finally is the irony of how little the parade will actually tell us about its subject – the Korean Worker’s Party. The party has long been subject to the whims of a family dictatorship. The communist parties of the twentieth century at least made gestures toward ideological coherence. But the KWP was hollowed out years ago when communism was replaced by a feudalistic ‘kimilsungism,’ named after the country’s first leader. That ‘ideology,’ as its name suggests, is an intellectual emptiness, nothing more than whatever the Kims happen to say at this moment or that. A supposed ‘worker’s party’ is actually just the mouthpiece of an intellectually formless tyranny.

Robert E. Kelly is a professor of international relations in the Department of Political Science and Diplomacy at Pusan National University. You can follow him on Twitter: @Robert_E_Kelly.

Image: Intercontinental ballistic missiles (ICBM) are driven past the stand with North Korean leader Kim Jong Un and other high-ranking officials during a military parade marking the 105th birth anniversary of the country's founding father Kim Il Sung, in Pyongyang April 15, 2017. The missiles themselves were shown for the first time inside a new kind of canister-based launcher on Saturday. The trucks upon which they are mounted are originally designed to move lumber.