North Korea’s Coronavirus Economic Downturn Has Made It Weak 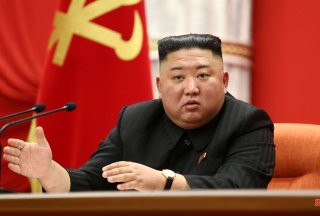 There is no question in anyone’s mind that North Korea’s economy, not exactly thriving in the best of times, is meandering in the doldrums. North Korean leader Kim Jong-un wouldn’t be invoking the “great arduous march” of the famine-stricken 1990s if he didn’t believe the Workers Party and the bureaucrats that staff the Kim dynasty failed the North Korean people. In fact, Kim openly wept last October during a military parade, apologizing to North Koreans for not meeting the economic promises he laid out in previous guidance. He can thank the coronavirus for that unseemly turn of events; Pyongyang’s trade with China, its only major economic partner, decreased by 80 percent last year after the Kim regime adopted the strictest coronavirus-related border closures in the world.

The question is whether the economic turmoil the North is experiencing will have any long-term repercussions with respect to North Korea’s domestic or foreign policy. It’s difficult to see either changing in the way preferred by the United States. Kim’s internal strength may have been constantly doubted in the first few years of his tenure, but his control over the North Korean political system today is practically insurmountable. High-profile officials in the bureaucracy, the military, or the Workers Party who attempt to carve out a semblance of independence in this top-down system are typically dealt with quickly and violently. Much has been made of Kim’s younger sister, Kim Yo-jong, and her meteoric rise within the North Korean elite. But she comes across more like her brother’s enforcer rather than a power in her own right. Kim’s greatest foe on North Korean soil is the same today as it was before the coronavirus-induced economic infraction: his sub-par health.

North Korea’s foreign policy is unlikely to evolve markedly either. Pyongyang will continue to reach out to counterparts in China and Russia when the opportunity presents itself. It is likely that those in charge of North Korea’s economy will make an appeal to Beijing to quickly normalize the trade relationship as soon as North Koreans are sufficiently vaccinated.

But a rapprochement or detente with Washington remains off the table. Arduous march or no arduous march, denuclearization is still a taboo topic for Kim. He may have signed a bland press statement with former President Donald Trump about denuclearizing the Korean Peninsula three years ago, but his actions reveal a man extremely reluctant to negotiate away his nuclear arsenal. The United States and North Korea are stuck in a catch-22 scenario, where the Biden administration remains intent on abolishing all of North Korea’s weapons of mass destruction programs and Pyongyang is sour on the thought of dialogue as long as the United States is wedded to the denuclearization concept. For a country used to living alongside economic sanctions and various hardships throughout its history, it’s hard to envision what the United States could offer that would persuade Kim to part ways with his nuclear life insurance policy.

The Biden administration’s North Korea policy is still working its way through the inter-agency. The contents will indicate whether Washington is intent on managing the North Korean nuclear problem with clear eyes or whether the 46th president of the United States is just as fixated on unrealistic objectives as the 45th, 44th, and 43rd presidents. It’s how the United States approaches this issue, not how desperate Kim feels economically, that will write the next chapter.