North Korea’s Kim Jong-un Survives (for Now). Is An ICBM or Nuclear Test Next? 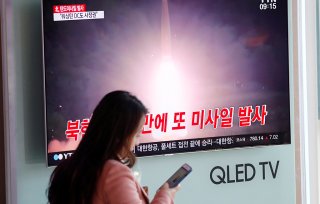 Reports of Kim Jong-un’s demise were clearly mistaken and premature. He’s alive, though the actual state of his health remains uncertain.

It will be important to preclude any suggestion that he’s wobbly in the face of potential challengers to his throne at home. Kim also has an opportunity: to exploit his return by reinforcing North Korea’s apparent strength, especially against the United States, with additional missile testing and, potentially, a nuclear test.

The North Koreans have yet to demonstrate a complete end-to-end ICBM test that delivers a warhead to a target, even if that “target” is a spot in the middle of the North Pacific Ocean. Rolling out a Hwasong-15 ICBM and placing a dummy warhead on top, and then firing it off, would be a very visible display of Kim’s strength—to both would-be domestic rivals, and as a warning to the United States not to take Pyongyang for granted.

Such an act would clearly break the verbally agreed moratorium on more North Korean long-range missile tests, but Kim may gamble that such a provocation could pay off. Kim would understand that there is no prospect that the status quo will bring renewed summitry leading to an agreement before the November re-election. He may decide he needs to radically alter the dynamics of the relationship to prod President Donald Trump back to the negotiation table, in a manner that leaves Kim in a position of strength, both in the eyes of the international community, and domestically. Kim wants Trump back to negotiate as a supplicant.

Another North Korean long-range missile test would leave three basic choices facing Trump. The first would be another round of summitry that would inevitably see Trump facing strong pressure to make concessions to Kim; the second is to respond weakly, thereby inviting additional ICBM tests or the prospect of a possible nuclear test, and that would (further) undermine his administration’s credibility; and the third is a limited military response that would risk rapid escalation into full scale war on the Korean Peninsula.

Any summit would see Kim demand that Trump make real concessions for a return to the testing moratorium. These would include firstly, the recognition of North Korea as a nuclear weapons state—comprehensive and verifiable denuclearization of North Korea simply won’t happen; secondly, a peace deal that ultimately sees U.S. forces withdraw from the peninsula (something Trump is threatening to do on a regular basis anyhow); and, thirdly, economic assistance to prop up North Korea’s economy.

Kim is likely to coordinate any moves with its key ally, China. Beijing would likely seek a Washington humbled in a summit with Kim—perhaps held in Washington DC itself—as conducive to furthering their narrative of a United States in strategic decline. Beijing would benefit from the inevitable decline in U.S. influence that would come from such an outcome if the summit ‘succeeded’ in a manner that gave Kim a decisive diplomatic victory.

What is more likely will be a failed summit, perhaps one in which Trump walks out, unwilling to make deep concessions to Kim. This would place pressure back on Kim to carry through with further provocations. More missile tests would be likely, but the key issue is whether Pyongyang also would consider undertaking a nuclear test.

North Korea has already threatened a “Juche Bird” atmospheric nuclear test over the North Pacific, and could form part of a true end to end test for a strategic nuclear weapons capability. Yet such a move would weaken Kim’s hand, drawing international opprobrium against the regime, and could force the United States to respond militarily and risk a new and devastating Korean conflict as 2020 draws to a close. When considered against a broader context of increasing tensions between China and the United States over Taiwan and in the South China Sea, and the global economic devastation caused by the coronavirus pandemic, a gamble by Kim for missile diplomacy could fail badly.