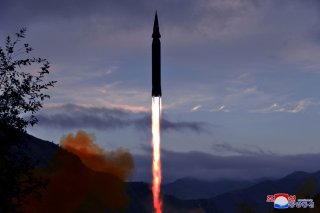 Early in the morning on September 28 yet another North Korean missile lifted off at around 6:40 AM from the area of Toyang-ri in central North Korea—the third of four tests that month, including long-range cruise missiles and a train-launched ballistic missile, both allegedly nuclear-capable.

Data from South Korean and Japanese radars did not identify anything all that impressive in the missile’s performance as it flew eastward out to a distance of around 124 miles (200 km) arcing shallowly to a relatively low peak altitude of just 100,000 feet (30 km) and then vanishing, presumably having plunged into the Sea of Japan.

The KCNA news agency subsequently announced North Korea had successfully tested its first hypersonic weapon, the Hwasong-8 developed by its Academy of Defense Science, consistent with a claim made by Kim Jong-un earlier in January that his scientists had completed research into hypersonics.

A lone photo in the press release showed looked like the familiar booster section of a Hwasong-12 intermediate-range missile with indeed what appeared to be a conical hypersonic glide vehicle on its tip. Such boost-glide missiles are designed to release the armed hypersonic glide vehicle (HGV) just after exiting the atmosphere. The glider then skips a considerable distance across the denser particles of the upper atmosphere before descending on its target.

The KCNA announcement described the Hwasong-8 as a ‘strategic weapon’—ie. capable of carrying nuclear warheads—and asserted the test “…confirmed the navigational control and stability of the missile in the active section and also its technical specifications including the guiding maneuverability and the gliding flight characteristics of the detached hypersonic gliding warhead.”

But statements from South Korea and the United States did not betray much alarm, or even certainty that a hypersonic glider had been tested as they apparently didn’t detect a glider separating from the booster.

The Hwasong-12 upon which the Hwasong-8 is apparently based is a liquid-fuel rocket with a range estimated to lie between 2,300 and 3,720 miles, but a South Korean missile specialist told Reuters that the Hwasong-8 appears to be a short-range system. He added that South Korean intelligence estimated the missile achieved a peak velocity of only Mach 2.5, well short of hypersonic speeds (Mach 5+) and even North Korea’s old, short-range Hwasong-6 ballistic missiles based on the Soviet Scud-C.

To be fair, failed tests are a necessary byproduct of developing missiles and rockets. The Hwasong-12 failed three flight tests in a row in April 2017, but then performed successfully in three tests between May-September the same year.

Arms control expert Jeffrey Lewis noted that the failure to detect a separating HGV could reflect a failure of the glide vehicle to separate properly—or sensors to detect said glide vehicle. He elaborated:

"The first cut at a modeling suggests that a shortened Hwasong-12 on a depressed trajectory (less than 30 km apogee) could fall around 200 km downrange while giving a heavy [3,300 lb.] glider a credible push at 3 kilometer per second [ie. Mach 8.7]… Either the glider crashed close to the booster or ground-based radars missed the HGV after separation. The North Koreans claimed the system "met the design requirements" but didn't say how far the glider flew. That makes me suspect it didn't glide very far..."

The Pentagon Press Secretary stated its analysts had concluded the new missile “does not pose an immediate threat to U.S. personnel or territory, or to our allies,” while South Korea’s Joint Chief of Staff dryly opined the purported hypersonic weapon would “require a considerable amount of time” before amounting to a viable weapon.

HGVs aren’t actually faster than a traditional ballistic missile as is often claimed, but they do benefit from greater maneuverability and approach their targets from a shallower vector, and thus have some potential to circumvent ballistic missile defense systems designed to detect and intercept higher-flying missiles that follow predictable trajectories. That doesn’t pose an insurmountable missile defense challenge, but it does require adaptation of tactics and technology, such as expanding sensor coverage to angles of approach previously considered "safe."

The KCNA announcement also briefly mentions that the test validated the “stability of the engine as well as of missile fuel ampoule that has been introduced for the first time.”

That innocuous-sounding technology may be altogether more concerning to the U.S. and South Korean militaries, as it could allow North Korea to launch its liquid-fuel missiles—not just the Hwasong-8—before they can be struck preemptively.

North Korea is undoubtedly pursuing more new weapon systems than it can hope to deploy in quantity. But Pyongyang’s external and internal messaging is better served by debuting lots of new weapons—even if only prototypes produced in limited numbers—than to double down on mass production of "finished" solutions like, say, Hwasong-15 Intercontinental Ballistic Missiles (ICBMs).

It was therefore inevitable that North Korea would pursue hypersonic weaponry, an inescapable buzzword in today’s arms race between China, Russia, and the United States. The former two countries have boasted loudly about their early adoption of such weapons, and the U.S. military-industrial complex has obligingly sought to catch up by pursuing numerous hypersonic programs to match.

But while North Korea engineers may still need to iterate quite a bit on Hwasong-8, the KCNA announcement implies another advance that arguably could do more to boost deterrence: the development of a fuel ampoule that allows delivery and deployment of long-range missiles with their gas tanks already full.

Despite having greater energy density and throttle-ability than solid fuel, liquid rocket fuel is considered so volatile and corrosive that it’s ordinarily used to only fuel the rockets just prior to launch. And that fueling process can take hours, during which the missile battery is extremely vulnerable to attack.

However, the Soviet Union earlier developed techniques to hermetically seal ballistic missiles full of liquid rocket fuel in a canister. Furthermore, the missile’s fuel tanks were insulated through redundant welding and a membrane to eliminate the risk of leakage. Such ampoule missiles could be delivered to military units in a fully-fueled state and remain actively deployed fully-fueled for decades, ready for relatively prompt launch. (There is some disagreement between nuclear arms experts as to what extent ampoule modifications focused on external or internal containerization.)

U.S. and South Korean strategy in the contingency of a war with North Korea would especially focus on detecting and destroying North Korea’s liquid-fueled missiles while they gas up for launch. But if North Korea has indeed developed technology to safely transport and maintain liquid-fuel missiles on indefinite standby, then those rockets could be set up for launch in minutes rather than hours, drastically reducing the preemptive strike window.

As nuclear arms expert Vipin Narang noted, that implies a “…big leap in survivability and promptness” while Lewis likewise observed, “If the DPRK (Democratic People's Republic of Korea) fuels the missiles in the factory, military units don't have to spend time doing it in the field when the U.S. Air Force is doing its level best to kill them.”

Of course, it’s hard to know for certain how far along North Korea really is in creating fuel ampoules, or how extensively it could be applied to both its older and future liquid-fuel missiles. However, this technology arguably poses greater near-term challenges to U.S. and South Korean security strategy than a hypersonic glid vehicle in the early stages of development.