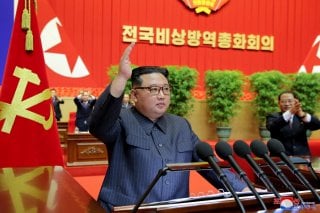 For more than two years, North Korea claimed to have no coronavirus cases. Then, earlier this year, they acknowledged an outbreak, while describing it as “fever.” Now, North Korea is claiming that its bout with Covid-19 is over.

The leader “solemnly declared the victory in the maximum emergency anti-epidemic campaign for exterminating the novel coronavirus that had made inroads into our territory and protecting the lives and health of the people,” KCNA said.

Kim did, however, push continued vigilance when it comes to dealing with the disease.

Per NK News, North Korea has implied that Kim himself caught the virus at one point.

Meanwhile, Kim’s sister Kim Yo-jong, the vice department director of the Central Committee of the Workers’ Party of Korea, went on to accuse South Korea of bringing the virus to North Korea.

“We have already considered various counteraction plans but our countermeasure must be a deadly retaliatory one,” Kim Yo-jong said, per a different KCNA report. “If the enemy persists in such dangerous deeds as fomenting the inroads of virus into our Republic, we will respond to it by not only exterminating the virus but also wiping out the south Korean authorities.”

Per Yonhap, South Korea’s unification ministry has disputed any notion that they are responsible for spreading the coronavirus into North Korea.

The South Korean government “expresses strong regret over North Korea’s insolent and threatening remarks based on repeated groundless claims regarding the inflow of the coronavirus at the national meeting on reviewing anti-epidemic measures,” an unofficial with the Unification Ministry said in a statement.

Fox News, meanwhile, reported that despite a reported offer, it is unlikely that North Korea will be sending troops to Russia, to aid in its war with Ukraine.

“The Russian propaganda machine could say that 100,000 North Korean volunteers would fight on behalf of Russia, just to scare the West, but in reality, it’s disinformation,” Rebekah Koffler, described as a Russia expert and former intelligence officer for the Defense Intelligence Agency, told the news outlet this week.

The report added that Russia and North Korea have not engaged in joint military exercises, nor have North Korean soldiers engaged in combat in decades.

“The command-and-control aspect of it is impossible. They do not speak Russian,” Koffler told Fox. “How are they going to use Russian weapons systems?… It would make more of a mess than it would help.” North Korea could, however, assist with some weapons systems.