In North Korea, “Squid Game” Can Get You Killed 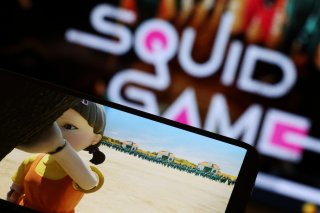 The government of North Korea has sentenced a man to death for smuggling copies of the Netflix series “Squid Game” into the country after seven high school students were caught watching the show, according to a report by Radio Free Asia (RFA).

The smuggler in question reportedly brought the show into the country from China, where Netflix is banned but the show is widely available on Chinese piracy websites. After smuggling it in, the man sold a USB flash drive containing the series to a high school student in North Korea’s northernmost North Hamgyong province.

That student viewed the series with his friends, who told others, eventually attracting the attention of “Surveillance Bureau Group 109,” a government censorship office. After apprehending the students and determining the identity of the smuggler from them, the bureau charged them with violating a new law on the “Elimination of Reactionary Thought and Culture,” which carries a punishment up to the death penalty for watching or distributing media from the United States or South Korea. Supreme Leader Kim Jong-un had earlier described South Korean “K-pop” music as a “vicious cancer” poisoning the ideals of young North Koreans.

North Korean authorities also reportedly interrogated all involved in the show’s distribution, attempting to determine how it was smuggled into the country when its border with China has largely been sealed off since the onset of the COVID-19 pandemic.

The students who were caught watching the show were also punished; the student who purchased the drive was sentenced to life in prison, while six others who viewed it were each sentenced to five years’ hard labor. The RFA report noted that one student’s rich parents were able to avoid serious punishment for their child by bribing the authorities.

The report also described teachers and administrators experiencing other punishments, including firings and banishment to remote areas for hard labor.

In spite of strict border controls and harsh punishments for those caught watching, the popular series has already circulated within North Korea. Ironically, while watching the show remains highly illegal there, the regime in Pyongyang has praised it, arguing that the dystopian world it depicts, in which contestants are pitted against each other in lethal games for the amusement of the rich, is representative of capitalism.

The show remains the most watched on Netflix overall and is the platform’s most popular series in ninety-four countries.