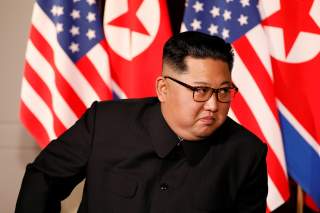 A second summit between Donald Trump and Kim Jong-un is now assured, offering an opportunity for the administration to refine its approach. As a baseline, we might expect both sides to reaffirm the agreement at Singapore, which itself borrowed language familiar to the world and U.S.-North Korean diplomatic interactions for nearly twenty-five years prior.

The challenge will be getting the two leaders to agree to anything new. Novel language will have to be agreed by both sides at the working-level—a process that is presumably underway in the aftermath of Kim Yong Chol’s visit to Washington.

As Kim outlined during his New Year’s Day address, the onus now will be on the United States to proffer concessions related to either sanctions or its military alliance with South Korea—the only two areas where sufficiently costly gestures might be found.

Without a U.S. concession, the summit will likely be a “soft“ failure, leaving us effectively right back where we were on June 13, 2018. With a U.S. concession, the process with North Korea would carry forward. We might then expect Pyongyang to follow up with another perfunctory denuclearization gesture of its own.

Last year’s North Korean gestures—a self-declared ICBM-testing moratorium, the dismantlement of the Punggye-ri testing site, and the dismantlement of the missile engine test stand superstructure at Tongchang-ri—did not affect Pyongyang’s missile and nuclear production capabilities. A sufficiently costly U.S. concession might unlock a North Korean gesture at Yongbyon where it may, perhaps, dismantle the now-old 5-megawatt gas-graphite reactor.

A “hard” failure out of a second summit remains a possibility. The U.S.-South Korea alliance is a particularly vulnerable target right now, with an ongoing tussle within the alliance over the conclusion of a Special Measures Agreement to decide allied burden-sharing for the next five years. Kim will no doubt be eager to exploit this opportunity to further chip away at the alliance’s readiness and unity.