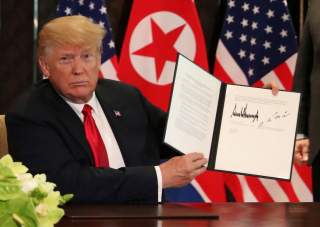 The Singapore Summit led to grandiose U.S. claims of breakthrough successes and regime acquiescence to long-standing international demands. Yet, Trump made three major mistakes in the Singapore summit: accepting a vague, poorly-crafted summit statement that was weaker than predecessor agreements; unilaterally canceling allied military exercises without reciprocal North Korean action; and exuberantly praising Kim Jong-un despite the North Korean leader being on the U.S. sanctions lists for crimes against humanity.

Trump’s claims of North Korean denuclearization failed to materialize. North Korean has not only not taken any steps to denuclearize but instead continues to nuclearize with new production capabilities to do so at an accelerated rate. All of the administration’s “successes” were achieved in greater numbers by previous administrations with less hype.

While there is always a chance of a surprise breakthrough in a second summit, recent North Korean public statements indicate the two sides are no closer to even having a common definition of denuclearization let alone a comprehensive detailed agreement.

In light of Trump’s unilateral concessions in Singapore and negative views of alliances, there are several concerns surrounding what he might do in the next summit. Trump could sign a peace declaration which would be a meaningless feel-good gesture that has no tangible benefits but could have serious negative consequences for the decades-old South Korean-U.S. alliance defense security. He may also be tempted to sign an “ICBM only deal” which purports to eliminate one threat but raising South Korean and Japanese fears of a decoupling of the alliances.

Finally, Trump might reduce U.S. forces in South Korea prior to reducing the North Korean conventional threat. He might do so as part of a deal with North Korea or in a fit of pique over the stalled Special Measures Agreement negotiations with Seoul.

What might the United States offer to Kim Jong-un? Special Envoy Stephen Biegun is reportedly seeking to create an escrow account of economic benefits to provide if North Korea denuclearizes. Along with recent U.S. efforts to facilitate humanitarian aid, it is hoped that this could provide impetus for movement.

But North Korean officials previously commented that no amount of economic aid can compensate for their security concerns from the U.S. “hostile policy.”

As we wait for the second summit: the stakes are high but expectations are low.

Bruce Klingner is Senior Research Fellow for Northeast Asia at the Heritage Foundation. He previously served 20 years in the U.S. Intelligence Community, including as CIA’s deputy division chief for Korea.