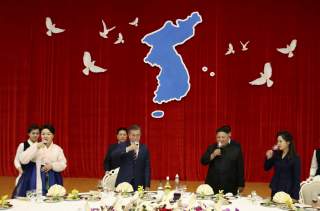 What can we expect from the second summit blockbuster between President Donald Trump and North Korean leader Kim Jong-un?  The easy answer is that the meeting could go either way.

Those anticipating a once-in-a-lifetime grand bargain, with Pyongyang handing over its nuclear deterrent in exchange for diplomatic and economic normalization with the United States, should get that fantasy out of their heads.  The best case scenario for the Trump-Kim summit is a binding commitment from both that the diplomatic process is worth continuing.  We are likely to see more specifics to the June 2018 Singapore statement, which was nothing more than a list of vague intentions and aspirational goals.  It is not beyond the realm of possibility that Kim agrees to suspend nuclear work at the Yongbyon plutonium facility (ideally verified by international inspectors) if Washington pays for his trouble with “corresponding measures” such as exceptions to a sanctions regime that is totally at the mercy of Chinese enforcement.  Despite the trepidation in Washington of an end-of-war declaration damaging the U.S.-South Korea alliance, a peace treaty will eventually need to be put on the table if the Trump administration truly wishes to accomplish Pyongyang’s complete denuclearization.

As important as what may occur is what won’t.  The U.S.-South Korea defense alliance will not end, and U.S. troops will remain on the Korean Peninsula as long as North Korea presents a national security threat to the stability of the Korean Peninsula.  While Trump would very much like to decrease the U.S. force presence in South Korea, he will be wary of touching the issue until his administration provides lawmakers with a compelling national security case about why a troop drawdown is necessary.  For a president already dealing with a mountain of political trauma, Trump is unlikely to want to create more problems for himself.

When Trump and Kim fly back to their capitals, there is a decent chance that both countries will begin implementation on the confidence-building steps that will insulate the diplomatic process from detractors who view the entire enterprise as a waste of time.  But the nuts-and-bolts negotiations have yet to begin.  If they do, the pundits should keep the talks in perspective—this will be a long, tough, and perhaps unsuccessful journey. To expect the U.S. and North Korea to end nearly seventy years of mutual hostility in a matter of months is detached from reality.