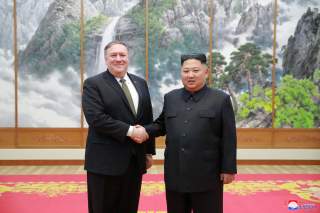 It is important to establish from the outset that America’s enduring interest on the Korean Peninsula is to avoid war. Peace, therefore, should be the ultimate objective of the Trump-Kim negotiations, while denuclearization is a long-term goal we should pursue. Regardless, American security and enduring prosperity can be assured due to our nuclear deterrent, defense capabilities, and economic power.

The absolute worst outcome for the United States would be choosing to use a military option to force a preferred outcome.

In his recent testimony before Congress, Director of National Intelligence Dan Coats predicted that Kim Jong-un would not ultimately give up his weapons program. He assessed, however, that North Korea’s nuclear program is not intended to be an offensive force, because “its leaders ultimately view nuclear weapons as critical to regime survival.” Thus, Coats’ assessment reinforces President Donald Trump’s course of action with Kim.

The North Korean dictator wants to continue leading his country for decades, as his grandfather and father before him. While he is a tyrant and calculating dictator, he is not suicidal. Kim understands that if he were to offensively use a nuclear weapon against the United States or our allies, we would retaliate with little hesitation, wiping out Kim and his regime. Instead, Kim is reserving the missiles as a means to deter U.S. invasion.

President Trump’s best diplomatic play is to assuage Kim of that fear by supporting and facilitating peace between South Korea and North Korea. President Trump should encourage a progressive series of demilitarization steps between the two neighbors and encourage the concurrent development of mutually beneficial economic ties.

It is unrealistic to believe Washington can demand Pyongyang give a series of concessions without offering any in return; we must be prepared to give appropriate security guarantees and take corresponding steps to achieve peace. Meanwhile, our security—as it has for almost seventy years—will continue to be underwritten by our overwhelming nuclear and conventional military deterrent.

It is possible that after a number of years each side can acquire enough confidence in the actions of the other that denuclearization could be realized. However, denuclearization is not possible without first cementing long-term peace and prosperity in the region.

Daniel L. Davis is a Senior Fellow for Defense Priorities and a former Lt. Col. in the U.S. Army who retired in 2015 after 21 years, including four combat deployments. Follow him at @DanielLDavis1.