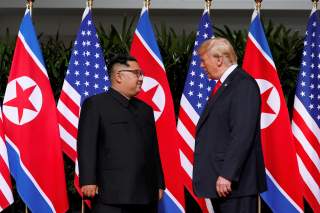 The expected second summit will likely end, much like the first, with Donald Trump and North Korean leader Kim Jong-un claiming they have reached an understanding on a mutually-agreeable path for continued negotiations.

Trump and Kim have every reason to portray their next meeting as a success. Trump needs to prove that, as he declared after the first Trump-Kim summit last year, there is “no longer a Nuclear Threat from North Korea.” Kim needs to keep the Americans from thinking about a preventive military attack and from spoiling the newly-permissive atmosphere for Democratic People’s Republic of Korea (DPRK) economic development. Kim is undeservedly lucky to have Trump negotiating on behalf of the United States. Unlike many of his senior advisers, Trump seemingly views the U.S.-ROK alliance as an economic burden rather than a strategic asset, making him at least partly amenable to accommodating a huge DPRK objective.

As with the first summit, actual progress toward North Korean denuclearization after the expected second summit will likely prove illusory. Whether Kim’s offer to denuclearize is sincere or not, there is virtually no chance Kim will take serious steps toward denuclearization early in the process without equally serious accommodation by the United States on North Korean grievances. But Kim has a large collection of low-value baubles he can trade to the Americans to create the impression of progress, and the Trump Administration is incentivized to play along.

Alternatively, Kim might offer a meaty concession on ICBMs that would directly address American fears about the DPRK’s threat to the American homeland, but at the cost of separating America from its allies South Korea and Japan, which would remain vulnerable to short and medium-range DPRK missiles. That would be a major win for Kim: keeping his leverage over Seoul and Tokyo while loosening their alliances with Washington.

Even if most American observers eventually conclude the second summit is a failure, there is little chance of a return to the high tensions of 2017 under the new conditions of 2019. For instance, China has relaxed its commitment to enforcing economic sanctions against North Korea, Seoul is enthusiastically moving to deepen North-South economic integration, and Pyongyang has stopped testing missiles and nuclear bombs. We are moving toward a new normal: North Korea as a de facto permanent nuclear weapons state, reduced tensions on the Korean Peninsula, and the chance to accelerate the Kim regime’s demise through increased exposure to South Korea’s subversive soft power.