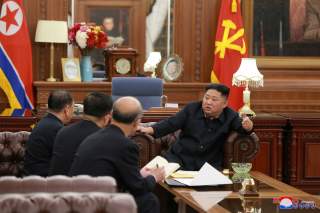 A suggestion for those who believe the next summit between President Trump and Kim Jong-un will move us closer to the end of North Korea’s nuclear weapons program: Lower your expectations.

And here is the dark secret you need to know about the diplomacy aimed at convincing Kim to denuclearize: the United States, South Korea, China, and Russia, each for its own reasons, are moving towards accepting the fact that they will probably have to learn to live with a nuclear-armed North Korea.

Secretary of State Pompeo recently shifted the focus of U.S. summit diplomacy to reducing the “risk” to the American people. This suggests Washington is setting its sights on eliminating Pyongyang’s missile threat to the American homeland, but not to our Asian allies and our overseas bases. This gives perverse new meaning to “America first.” It may also reflect Washington’s realization that its earlier, more ambitious denuclearization goals cannot be attained.

Meanwhile, Seoul is prioritizing reconciliation over denuclearization. Beijing and Moscow appear content with Pyongyang’s nuclear-armed status quo as long as North Korea is not testing. And South Korea, Beijing, and Moscow are urging the easing of sanctions and pressure on Pyongyang.

Kim Jong-un knows all this. Convinced he can keep his nukes and enjoy better relations with Washington and Seoul, he knows that the best way to do so is to hold out the possibility of denuclearization, even as he strengthens his arsenal. For Kim, the goal is to create the illusion of denuclearization. And Kim also knows that all the nuclear and missile measures he has taken or might propose at the summit are easily reversible.

So at a second Trump-Kim summit, expect Kim to offer “concessions” that support that illusion, but that do nothing to actually end his nuclear weapons program. Expect a politically embattled American president, eager for a win, to agree.

Evans J.R. Revere is a former Principal Deputy Assistant Secretary of State for East Asian and Pacific Affairs. He is currently senior director with the Albright Stonebridge Group and a non-resident senior fellow at the Brookings Institution Center for East Asia Policy Studies. From 2007–2010, Revere served as president and CEO of The Korea Society.