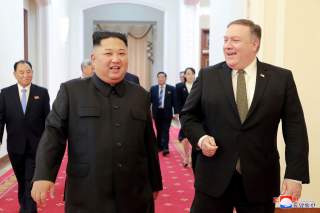 Assessing prospects for the Trump-Kim summit, we should ask: (1) What matters most for American national interests? (2) Compared to what? Where would we be absent the policies and actions of the Trump Administration?

When the Trump Administration began, North Korea stood on the threshold of a reliable capability to deliver nuclear warheads against the American homeland. Its November 2017 ICBM test demonstrated that it could deliver a payload of nuclear weapon size to the American west coast, but was still short of a reliable reentry vehicle to achieving this objective.

But since then, North Korea has stopped all ICBM and nuclear tests (and thus not acquired a reliable capability to strike the United States) and has pledged to denuclearize. In his 2019 New Year’s speech, for the first time, Kim Jong-un promised that North Korea “would neither make and test nuclear weapons any longer, nor use and proliferate them.”

If the upcoming summit ends with a verifiable commitment from North Korea to eliminate all ICBMs, and not to produce additional missiles, in exchange for a political declaration ending the Korean War, that would be a significant achievement. If in the months ahead, North Korea can be persuaded to take further steps that serve American interests in exchange for South Korea and the U.S. relaxing sanctions, restoring diplomatic relations, investments, and even normalizing relations with a verifiably denuclearized North Korea, this would count as a historic achievement.

Director of National Intelligence Dan Coats was right when he testified last Tuesday that North Korea is unlikely to zero out its nuclear arsenal because it’s critical to regime survival. But so was Secretary Pompeo in his claim that the United States is safer today than we were when Trump took office.

Graham Allison is the Douglas Dillon Professor of Government at Harvard University. The author of 12 books, he has also served as Assistant Secretary of Defense in the Clinton administration and Special Advisor to the Secretary of Defense under President Ronald Reagan. You can follow him on Twitter at @GrahamTAllison.