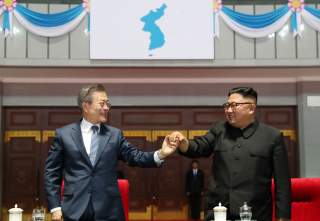 While the Singapore Summit signaled the end of “maximum pressure,” the second summit in February will signal the start of “engagement.” Working-level meetings and South Korean diplomacy have done all they could in opening a window of trust. Trump and Kim Jong-un will now define the great lines of normalization.

There will first be crowd-pleasing sacrifices on the altar of denuclearization. Kim has proposed to eliminate North Korea’s fissile material production facilities at Yongbyon and beyond. He expects “corresponding measures,”  though. These will come in the form of partial relief from U.S. sanctions, and possibly exemptions from UN sanctions.

This barter would have been the centerpiece twenty years ago, but today it has only limited significance. This is not a capitulation. North Korea already has the bomb. It cannot un-invent it. Even with years of cat-and-mouse games on verification, we will never have the assurance that it is not hiding something somewhere. And why wouldn’t it, given Libya, given Iran?

What then is Trump trying to achieve at this summit? He differs from his predecessors in two significant ways here. The first is his irreverence for nonproliferation. He famously exhorted South Korea and Japan to get their own nuclear weapons. The second is his belief that it is China rather than North Korea that represents the greatest threat to U.S. interests. This became clear at the latest with his “America First” National Security Strategy.

In this worldview, there are only upsides to normalization with North Korea. Trump can ensure there is “no longer a Nuclear Threat” by ending the reason for which warheads were aimed at the United States. “KOREAN WAR TO END!,” as he tweeted after Panmunjom. He can also capitalize on North Korean anxieties vis-à-vis China to coax the country out of Beijing’s orbit. The parallels with U.S. strategy for Vietnam would be emphasized by holding the summit in Hanoi.

Accordingly, we can expect Trump to pitch peace with Pyongyang, even against resistance in his own administration. He will push for channels to continuously promote normalization, such as a liaison office. He may also reaffirm a promise from the Six-Party Talks not to attack North Korea with conventional or nuclear means. He will not, however, declare an end to the War or a withdrawal of U.S. troops in the absence of South Korea. We should expect movement on these issues after the summit.

Henri Féron is a Post-Doctoral Research Scholar for the Center for Korean Legal Studies at Columbia University. He is the author of “Doom and Gloom or Economic Boom: The Myth of the North Korean Collapse” and the co-editor of Pathways to a Peaceful Korean Peninsula: Denuclearization, Reconciliation and Cooperation. Follow him on Twitter @henriferon.