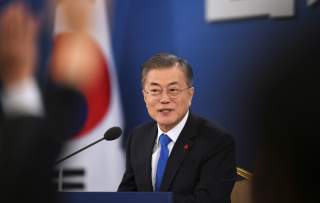 Only in Washington does anyone still think that North Korea’s nuclear weapons and ballistic missiles are the central focus of diplomacy on the Korean Peninsula these days. Everywhere else that matters—in Pyongyang, Seoul and Beijing—the big issue is the progress in rapprochement between North and South. And the key question about the upcoming Kim-Trump Summit is whether Washington’s fixation with the nuclear issue will get in the way of that.

The new focus began with Kim Jong Un’s New Year speech last year. Since then, both Koreas, with Beijing’s active support, have been pushing to redefine their relationship from mutual hostility to peaceful coexistence and economic engagement—with the North’s nuclear arsenal largely intact. Their reasons for doing this are clear and compelling.

Kim seems to have decided that now that he has nuclear weapons his regime’s best chance of survival lies in economic development, which requires opening up to his neighbors on both sides.

South Korean president Moon Jae-in seems to believe that ending the hostility is the key to removing the political roadblocks to the domestic reforms that are critical to South Korea’s future, even if that means living with Pyongyang’s nuclear forces.

And in Beijing, President Xi Jinping sees a big strategic dividend from a Korean rapprochement which would remove the need for U.S. forces on the peninsula, loosen or dissolve the U.S.-ROK alliance, and weaken America’s strategic position in Asia. His influence seems to have been key, as we can see from the remarkable series of meetings he has had with Kim over the past year.

Of course not much progress can be made while North Korea remains under draconian U.S.-inspired sanctions, and as long as China and South Korea feared angering Donald Trump when he was in his “fire and fury” phase. So Washington’s main contribution to events on the peninsula recently has been to get out of the way, which Trump very plainly did in Singapore last year. His feckless diplomacy suggested he too is happy to live with a nuclear North Korea, and doesn’t care much about what else happens on the peninsula.

But almost everyone else in Washington disagrees. We can expect people like John Bolton to be pressing his boss to toughen up with Kim and put the nuclear question back at the top of the agenda. So the big question about this summit is whether they convince Trump to demand real progress on denuclearization and block rapprochement, or whether Trump goes his own way and lets things slide as he did in Singapore, which would keep America out of the way.

But maybe it doesn’t matter much anymore which path he chooses. U.S. relations with Beijing and Seoul are both, for different reasons, at such a low ebb that they may no longer care much what Trump says, and the process of rapprochement may continue whatever happens between Trump and Kim later this month.

Hugh White is a professor of strategic studies at the Australian National University in Canberra.