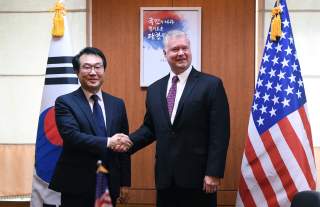 President Donald Trump plans to meet once again with North Korean leader Kim Jong-un. This second summit will be held in Vietnam near the end of February. Both sides should do their best to avoid a meeting that ends up being more showmanship. Concrete actions need to be taken, and Trump needs to decide whether or not to continue to insist on Kim giving up his entire nuclear weapons program.

There seem to be some hints that both sides will budge. America’s Special Representative to North Korea, Stephen Biegun, announced during a speech on January 31, that “President Trump is ready to end this war.” In addition, Biegun said that “We are not seeking to topple the North Korean regime” and that sanctions relief could be a part of a final deal.

This is good because a peace that aims to fundamentally change the relationship between Washington and Pyongyang from that of mortal enemies to that of low-key strategic rivals is what Kim wants. For instance, during the first summit in Singapore in 2018, both Trump and Kim agreed to create a “peace regime.” Moreover, Kim needs sanctions relief in order to help maintain his rule and prosper.

In exchange for some of these first steps, Biegun claims Kim will destroy all of his enrichment facilities. This is important because Washington has long demanded that Pyongyang cease and dismantle its nuclear weapons program. Kim’s decision to do so requires that the fundamental relationship with the vastly more powerful America is less antagonistic.

An end to the Korean War, normalization of diplomatic relations, and some sanctions relief would lower tensions and the chance of war. For example, think about when President Richard Nixon went to China and suddenly transformed the Washington-Beijing relationship from hated Cold War adversaries into a new era of more-or-less getting along.

However, either country could renege on its promises. Trump could get tired of diplomacy or believe that Kim is stalling. As a result, Washington could return to maximum pressure and even consider military action—a decision that would be disastrous. Kim could also get tired of waiting for sanctions relief or may actually be stalling.

Ultimately, Trump must decide what is a realistic goal (full nuclear disarmament is not) and what cost America is willing to bear (war is not). With a clear goal and cost in mind, Trump will be better poised for success at the next summit.

John Dale Grover is an assistant managing editor at The National Interest. He is also a fellow at Defense Priorities and a writer for Young Voices.