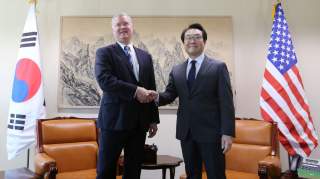 The second summit will pursue these two core objectives—complete denuclearization and a peace treaty ending the Korean War. Accordingly, it’s likely the U.S. will commit to an eventual peace treaty to end the Korean War and North Korea will commit to a verifiable denuclearization process dealing with its nuclear weapons and facilities. It’s also likely that both sides will agree on an action-for-action process that builds greater trust and ensures that there is an element of reciprocity in this important relationship. During private discussions at the summit, North Korea hopefully will be reminded that the U.S. defines complete denuclearization as the complete, verifiable and irreversible dismantlement of its nuclear weapons and nuclear weapons facilities. North Korea will remind the U.S. that sanctions relief will also be necessary if the U.S. expects the North to stop producing fissile material and commence with the dismantlement of its nuclear facilities.

The summit will mandate that their respective lead negotiators will routinely meet to address these objectives and draft a road map, with general timelines, for the pursuit of these goals. The summit will reaffirm both countries’ commitment to the eventual establishment of normal diplomatic relations and an agreement to start this process with the initial establishment of liaison offices in the respective capitals.

The international community will comment favorably on the results of this second summit. Most importantly, however, U.S. and North Korean negotiators will work hard to prove that substantive progress is being made to resolve the myriad of issues with a nuclear North Korea.

Joseph R. DeTrani was the former U.S. Special Envoy for Negotiations with North Korea. The views are the authors and not any U.S. government agency or department.