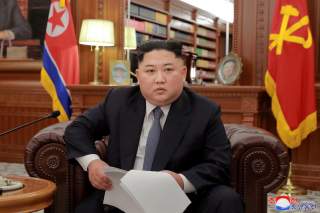 President Trump prides himself on the art of the deal. His supporters believe his style can transform situations that are frozen in place such as North Korea. In their eyes, Trump’s second meeting with Kim Jong-un will continue a process that will win him a Nobel Peace Prize. More careful observers believe that Kim is taking the great negotiator for a ride.

The good news from Singapore last June was that the artificially-inflated prospects of war on the Korean Peninsula were reduced. From that point of view, we should welcome continuing negotiations. But the bad news was that Trump granted Kim’s objectives of status and legitimacy and a weakened South Korean alliance without getting anything in return.

The formal communique was short on substance and long on ambiguity. The United States committed to security guarantees; North Korea committed to eventual complete denuclearization of the peninsula. Both sides committed to a new relationship and to a “lasting and stable” peace. Subsequently, Trump spoke to the press about reducing the joint military exercises that the United States and South Korea use to enhance their readiness to defend the South.

Trump claims he is a great negotiator, but he got less and gave away more than was already on the table with previous presidents. He got a vague promise that is even weaker than previous promises that the Kim regime has made and broken several times. Nuclear weapons are central to the domestic legitimization of the Kim monarchy that rules North Korea. When I served in the Clinton Pentagon, Kim’s grandfather lied to us about their nuclear program; his father then lied to Presidents Bush and Obama. Why should we believe yet another ambiguous promise to denuclearize? Trump and his supporters say this time will be different because Trump is a better negotiator, but the evidence suggests he will settle for cosmetics.

The danger of a cosmetic “breakthrough” at the next meeting would be if we allow it to weaken our alliances with Japan and South Korea. We should remember that behind the cosmetics, the Kim family objective has been to dominate the peninsula and remove American protection of the South. If Kim can extract some economic relief, so much the better, but he is not denuclearizing. Of course, cosmetics are better than war, and we should stretch out negotiations to prevent that, but it would be a lousy deal if we damage our alliances in return for false promises. We have seen that movie before!

Joseph Nye is a professor at Harvard. His forthcoming book is Do Morals Matter? Presidents and Foreign Policy from FDR to Trump.