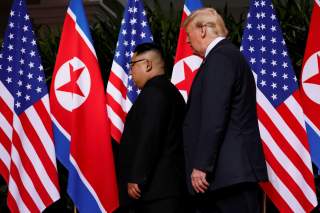 There are signs that the Trump administration took away some lessons learned since Singapore to use the carrot of a second summit as leverage.

The administration is trying to make Special Representative Steve Biegun a central actor in nuclear negotiations, suggesting that the administration is seeking to empower him and bureaucratize the negotiation process. He met North Korea’s chief negotiator Kim Yong Chol at the airport in Washington, attended the Oval Office meeting with Kim and his delegation and a lunch, and later traveled to Stockholm for separate talks with North Korean officials—all opportunities for face time with North Korean interlocutors. He also delivered a comprehensive speech at Stanford University, articulating Washington’s expectations for North Korea—a full accounting of the nuclear and missile programs, “access and monitoring mechanisms of key sites,” and the “removal and destruction of stockpiles of fissile materials, weapons, missiles, launchers, and other weapons of mass destruction.” And as President Trump was delivering his State of the Union address, Biegun was in Pyongyang to discuss the summit agenda and hopefully, an agreement on a roadmap for denuclearization.

Yet there are still huge gaps between the U.S. and North Korean positions. Biegun’s address acknowledged that Kim Jong-un has not followed through on “significant and verifiable progress on denuclearization”; Kim has been insisting on corresponding U.S. measures before he would undertake such moves. Biegun also stated that the two sides have yet to agree on a “specific and agreed definition of…final, fully verified denuclearization,” laying bare the hollowness of the President’s triumphant declaration post-Singapore that “There is no longer a Nuclear Threat from North Korea.”

Despite the challenges, Biegun underscored Trump’s desire to show his virtuous intentions for the future of the bilateral relationship, claiming, “President Trump is ready to end this war. It is over. It is done. We are not going to invade North Korea.” This suggests that Trump is willing to declare an end to the Korean War—as he mentioned in Singapore and in the State of the Union address when he hinted at “our historic push for peace on the Korean Peninsula.” Such a dramatic declaration probably will dominate the headlines, adding to the theater of a summit, while distracting from the tough issue of denuclearization and eroding the justification for U.S. troop presence in South Korea, even as the North Korean threat remains.

The U.S. still has room to maneuver, retaining the prerogative to postpone the summit. As President Trump admitted in his address, “Much work remains to be done.” And North Korea’s receptiveness—or intransigence—in working-level talks will be clear indications of Kim’s sincerity and his perception of the Trump administration’s message discipline and U.S. credibility.