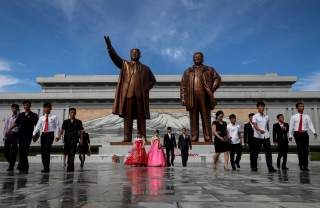 Summitry is far preferable to the alternatives of deepening crisis and even (nuclear) war. The “double-freeze” concept that now constitutes the new status quo (originally proposed by China and Russia) does represent a modicum of new stability. That achievement, albeit of limited nature, should not be tossed away in a fit of frustration. Moreover, the North Korean regime continues to be “boxed in,” and under significant pressure. The sky did not actually fall when President Donald Trump opted to suspend and later limit the scope of the U.S.-South Korean joint military exercises.

Despite the above partial successes in calming tensions, transformative change on the Peninsula remains elusive. Why? First, the administration has so far only opted to play “small ball.” Some may have thought that a simple meeting between the two leaders would be enough to elicit major concessions from Pyongyang. Now, it seems trendy to talk of the importance of a “peace treaty” to finally end the Korean War. While welcome, of course, these symbolic gestures amount to “tiddlywinks” in the way of either material or tangible security benefits for Pyongyang and so may prompt just a yawn from the North Korean leader. A second problem in Washington’s approach has been the obvious divergence with Seoul. President Moon Jae-in is the right person at the right time and should be lauded as an extraordinary peacemaker (quite deserving of the Nobel). The U.S. should be doing all it can to ensure his success.

A third critique is linked closely to the first two. As Washington has played “small ball,” it has failed to put major carrots on the table in at least two respects: 1) the size and disposition of U.S. forces based in South Korea and 2) the deployment of U.S. nuclear weaponry in and around the Peninsula. Just as we have seen lately in the Afghanistan situation, even the mere suggestion of a drawdown in U.S. forces can be a strong prompt to creative diplomacy. A final and most important problem with the current approach is that it all but ignores cooperation with Beijing and also Moscow. Both these great powers have rather good relations with Seoul and can help fundamentally to deliver trade and investment benefits to reward Pyongyang’s good behavior. Even more tangibly, they can deliver the nuclear weapons expertise, along with credible security guarantees that Kim would require to accede to a serious arms control regime.

Yet, most important at this late stage is the realization that a partial solution is better than none at all.

Lyle J. Goldstein is research professor in the China Maritime Studies Institute (CMSI) at the Naval War College. The founding director of CMSI and author of dozens of articles on Chinese security policy, he focuses on Chinese undersea warfare. The opinions of the author are entirely his own and do not reflect the official assessments of the U.S. Navy or any other agency of the U.S. government.