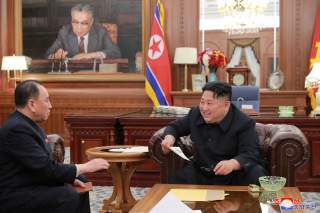 President Trump and North Korea’s ruler, Kim Jong-un, are headed for a second summit, but this summit won’t see real progress towards North Korean denuclearization being made. Recent DNI threat assessments suggest North Korea is unlikely to give up its nuclear weapons.

The outcome of the second summit may depend on how badly President Trump seeks to sustain a fiction of success with North Korea that he can sell to his domestic base. He might be tempted to make concessions, as he did in Singapore, for little in return. Pyongyang is insisting America end economic sanctions, provide security guarantees, and sign up to a peace deal. That final concession would allow North Korea to argue that U.S. forces on the Peninsula should withdraw, even as Pyongyang maintains its nuclear capabilities.

If Trump agreed to such concessions, he’d seriously damage U.S. credibility in the eyes of Tokyo, Seoul and other allies, whilst providing a victory to U.S. adversaries.

Instead, Trump should place strong pressure on Kim to provide meaningful steps toward denuclearization. This would include an accounting of its nuclear weapons and missile infrastructure to be verified by international inspections, and, as an interim measure, a verifiable cap on production of long-range missiles and warheads.

In return, America could offer to provide security guarantees and ease the economic sanctions (which are leaking anyhow) contingent on future progress towards denuclearization of North Korea. U.S. troops should stay on the Peninsula even after the signing of a peace agreement.

North Korea will likely reject such a deal, leading to an impasse and the prospect of a collapse of the diplomatic process.

Trump would face an unenviable choice. His first option might be to accept North Korea gets to keep its nukes and fall back on a deterrence-based solution. That would make him look foolish after boasting that thanks to him “there is no longer a nuclear threat from North Korea.” Alternatively, and more likely, Trump might try to re-apply maximum pressure—a “fire and fury Mark II”—in the hope that this will force Pyongyang back to the table.

The risk is that this second option could backfire. It will certainly generate escalatory dynamics that could see a quick slide back to North Korean missile and nuclear testing, and on into military conflict on the Korean Peninsula in 2019.

Dr. Malcolm Davis is a Senior Analyst in Defence Strategy and Capability at the Australian Strategic Policy Institute.