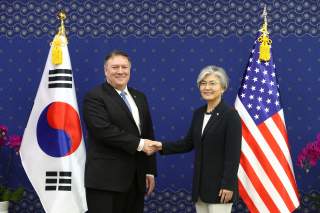 Donald Trump heads into a second summit with North Korean leader Kim Jong-un poised for either a repeat nothingburger, disaster for U.S. alliances, or a modest step forward.

The nothingburger scenario seems most likely. The President heralded his June 2018 summit with Kim as the end of the North Korean nuclear threat, even though Kim promised only the “denuclearization of the Korean peninsula”—a well-worn North Korean formula that essentially means Pyongyang will end its nuclear weapons capability when the U.S. does. The good news in the nothingburger scenario is that Pyongyang will likely refrain from further provocative missile and nuclear tests. The bad news is that the North’s capabilities will continue to expand while Donald Trump’s triumphalism erodes the international sanctions regime and military exercises necessary to contain the North.

The disastrous scenario is second most likely, unfortunately. The President’s precipitous formula for retreat from Syria and Afghanistan suggests that he really meant it when he told Kim publicly in Singapore that he wanted U.S. forces off the Korean peninsula someday (without previewing the comment with his own administration or U.S. allies). Kim no doubt senses like ISIS and the Taliban that this President is looking for excuses to cut-and-run, and China and Russia are keen to abet that diplomacy. A reformulated pledge by the North to denuclearize and commit to “peace” coupled with Trump’s extreme demands that South Korea pay exorbitant amounts for U.S. forces on the peninsula could prove the perfect alibi for the President to announce withdrawal from the peninsula. In the end, the Congress and Trump’s own national security team would throw themselves in front of that runaway train, but the impact on American credibility would take a long time to undo.

The least likely scenario, but one that should not be ruled-out given the professionalism of negotiators like Steve Beigun, would be modest confidence-building steps such as a North Korean declaration of all its nuclear and missile-related facilities for eventual dismantlement or full access to the Yongbyon nuclear facilities. Of course, North Korea gave such access to Yongbyon in previous rounds of diplomacy in the 1990s and 2000s, only to cheat and build new weapons. Still, modest traction is better than war and would have been the most likely scenario after the successful U.S. sanctions campaign against the North in 2018—if President Trump had not fallen in love with Kim in Singapore.

Michael J. Green is senior vice president for Asia and Japan Chair at the Center for Strategic and International Studies (CSIS). Dr. Green also serves as the director of Asian Studies at the Edmund A. Walsh School of Foreign Service at Georgetown University.