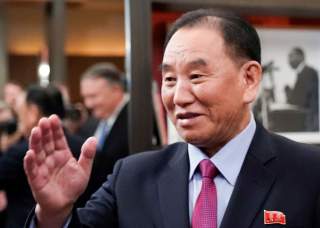 In his upcoming, second summit with North Korean leader Kim Jong-un, President Donald Trump should get pragmatic. He should do a deal that eliminates North Korea’s ability to produce more bombs, as well as longer-range missiles, in exchange for a partial lifting of sanctions. Trump should not worry about the prompt elimination of existing North Korean nuclear bombs, which Pyongyang will almost surely not be game to bargain away at this juncture.

We are at a fraught moment and the opportunity for diplomacy may be shrinking away. Trump’s brinkmanship approach to North Korea in 2017 seemed haphazard, impetuous, and downright dangerous at times. But on balance—and although there is a long way to go—I am supportive of what Trump seems to be trying to achieve in his administration’s dealings with Kim since then. The combination of sanctions, the hint of a possibility of U.S. military action (however unwise), and positive diplomacy has created the possibility of progress. A combination of fear and pain, combined with hope for a better future, may be just the right juxtaposition of sentiments to have instilled in Kim’s mind. Whether through design or chance, or a bit of both, Trump managed to achieve this mix by 2018.

In a fair reckoning, I would give Trump some credit. It is hardly time to celebrate in the endzone, and Trump could still very easily fumble the football. But after inheriting a Korea policy that had failed badly under his predecessors, Trump has us within possible striking distance of a touchdown—or at least a field goal, in the form of lifting some UN sanctions in exchange for a complete and verifiable dismantling of Pyongyang’s capacity to build more bombs.

Recognizing the risks, I think it’s not a bad overall approach to give North Korea a stake in better relations with the United States, while at the same time keeping economic pressure and military deterrence robust. And Trump’s instinct to aim for a fundamentally transformative relationship with North Korea is actually more inspired and promising, to my mind, than the incrementalism that we’ve generally adopted for the last quarter-century.

But this only works if we are pragmatic now. Otherwise, it will soon become apparent that there is no deal in the offing and no prospect that one will emerge. If Pyongyang is fundamentally unwilling to give up what it sees as its main deterrent now, and Washington will only settle for a “Libya model” of complete and prompt denuclearization, we are at an impasse—and indeed, the dangers of 2017 could quickly return. The risks of a severe split in the U.S.-ROK alliance could also grow.

Capping the North Korean nuclear arsenal in exchange, say, for a suspension then lifting of UN sanctions imposed since roughly 2016 (but while keeping earlier sanctions, and U.S. sanctions, in place until the day when we might actually see complete denuclearization) could give North Korea enough incentive to give up its future production capabilities while limiting the threat it can pose in the future. Permanent test and flight bans, and perhaps the elimination of its chemical arsenal, should be part of such a deal too.

Hardliners might object to such a deal, but it is the best outcome we can realistically aspire too—and it would improve American and regional security substantially.

Michael O’Hanlon is a Senior Fellow and the Director of Research of Foreign Policy at the Brookings Institution.