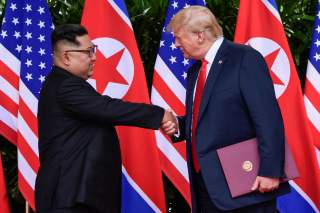 President Trump was able to conceal the weakness of the outcome of the Singapore U.S.-DPRK summit by emphasizing the symbolic significance of a face-to-face meeting between the leaders of both countries after nearly seventy years. But the upcoming second summit is different; if he cannot obtain tangible results that would lead to North Korea’s denuclearization, it will be difficult for him to claim success.

After witnessing the stalemate since the first summit, President Trump is likely to have realized that a complete denuclearization of DPRK at this stage is an overly ambitious goal. It would not be a surprise if he decides to adjust this goal to simply eliminate North Korea’s long-range missile program which is, after all, what directly threatens the American people. He may consider the achievement of removing the threat of North Korean nuclear strikes on U.S. mainland as a good selling point for his presidential campaign in 2020. It is worth pointing out that the U.S. Secretary of State, Mike Pompeo, referred to the necessity of decreasing the risk that North Korea poses on the American people in an interview with Fox News last month.

This second summit is likely to focus on mitigating sanctions on Pyongyang in exchange for North Korea abandoning its long-range missile program. The first section of the joint declaration of the second summit, which is being drafted by both countries’ working level officials, seems to mention the dismantling of ICBM test and launch facilities in North Korea, the disposal of the long-range missiles already produced and the shutdown of the Yongbyon nuclear complex. The second section would mention the corresponding rewards, such as the exemption of inter-Korean economic cooperation from U.S. sanctions against North Korea, easing of some sanctions, officially declaring the end of the Korean War and opening of liaison  offices in Washington DC and Pyongyang. In other words, the second Trump-Kim talk could be concluded with the mere removal of North Korea’s long-range missiles while its medium and short-range missiles, nuclear warheads and nuclear materials are preserved; that would be a nightmare for Korea and Japan.

President Trump may claim great success from this second summit, arguing that he has freed the American people from the threat of North Korean nuclear missiles. He would, however, be unable to avoid the criticism that the security of America’s allies has been ignored. Hence the importance of the third section of the joint declaration; it should specify the FFVD (Final, Fully Verified Denuclearization) of North Korea as a final goal, and clarify the timetable and roadmap for  its implementation. President Trump will otherwise go down in history as the man who officially granted North Korea the status of a de facto nuclear-weapon state.

Bae Myung-Bok is the Editor-at-large and columnist for JoongAng Ilbo, Seoul. He has also worked in the International Affairs bureau as Foreign News Editor, Senior Staff Writer, and News Desk and been a Foreign Correspondent posted in Paris.