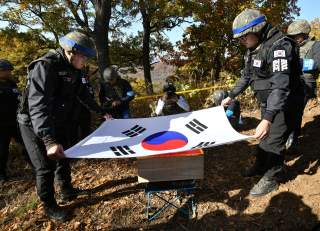 If we are expecting a dramatic breakthrough at the second Trump-Kim Summit that will lead to total denuclearization of the DPRK we are sure to be disappointed. What Pyongyang seeks is “complete denuclearization of the Korean Peninsula” which the North has defined as first removing the US nuclear threat to the DPRK before it will even discuss giving up its nuclear capabilities. Will Washington accept this definition? One certainly hopes not but there must be an effort to find common ground that will include some U.S. concessions aimed at providing security assurances to the North, such as no deployment of U.S. strategic assets to the Peninsula, etc.

Meanwhile, the North seems to believe that Trump promised Kim he would sign an End of War Declaration during the first Summit and is likely to insist he live up to this pledge. If Trump does, the United States must make a clear distinction between such a Declaration and a formal peace treaty, which should require mutual recognition by the North and South of one another’s legitimacy; this would be a significant signal of Pyongyang’s sincerity but needs to be worked out between South and North (with U.S. encouragement). A peace treaty signed by only Pyongyang and Washington would be highly inappropriate and feed the North’s narrative.

The first step toward making things better is to stop making them worse. The North is still producing nuclear weapons/fissile material and missile delivery systems but has reportedly offered to at least dismantle the Yongbyon facilities in return for “corresponding measures.” If the North is prepared to spell out what these measures are, this will allow for future progress and be an important step forward, even if dismantling Yongbyon addresses only part of the threat.

Meanwhile, the greatest danger is not that the talks break down but that the United States, eager for a victory, accepts a bad deal and proclaims it to be a breakthrough. Meanwhile, the North continues producing and deploying its weapons and missiles while Washington pretends the problem has been contained, if not solved. A deal that addresses the ICBM threat to the U.S. while ignoring the threat posed to our ROK and Japanese allies will also prove counterproductive and could prompt both allies to lose faith in the alliance and pursue their own independent nuclear capabilities.

Ralph Cossa is the President Emeritus and WSD-Handa Chair in Peace Studies at the Pacific Forum. He is a member of the ASEAN Regional Forum (ARF) Experts and Eminent Persons Group and frequently contributes to regional newspapers on U.S. policy in the Pacific. You can follow him on Twitter at @RalphCossa.